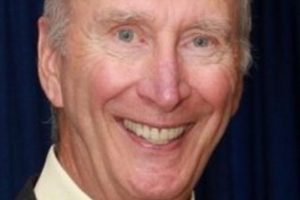 A man I truly admired died last week in the southern California mudslides, the region’s first confirmed victim of the disaster. Live accounts and videos captured the roar and unimaginable force of liquid mud overtaking homes as heavy rains pounded on the freshly denuded, fire-ravaged hillsides surrounding Santa Barbara at the time. The experience must have been terrifying.  His wife was

A man I truly admired died last week in the southern California mudslides, the region’s first confirmed victim of the disaster. Live accounts and videos captured the roar and unimaginable force of liquid mud overtaking homes as heavy rains pounded on the freshly denuded, fire-ravaged hillsides surrounding Santa Barbara at the time. The experience must have been terrifying.  His wife was rescued and recovered in a nearby hospital. He was found later.

I’d only met this man, Roy Rohter, five or six times. Each time the experience involved a lively, passionate exchange — well, mostly me listening — as he laid out practical solution(s) for struggling Catholic entities he cared about or how to effectively extend the work of one or two of these organizations so as to transform more souls to live Christ fully in one way or another.

It would be impossible not to pay attention to Roy.  Not to be engaged.  He knew people, and if he recognized in you a hint of openness, he grabbed you by the collar with personality, passion and bit of good humor, even at his nimble age of 84.

Raised in a rough part of south Chicago by a Jewish father and a Catholic mother, with no practice of either religion growing up, Roy described his life as “sudden and unexpected” according to Michael Van Hecke, a friend who explained that phrase by saying: “He was referring to how the grace of God slammed into his life and brought him the great good of faith, apostolate and, most important, family.”

Prior to the devastating mudslides, as California wildfires raced through the Santa Barbara region, Roy and his wife had evacuated to the Van Hecke’s home for eight days. During this time he shared the moment of his conversion. It had taken place during “a powerful moment at a Mass he was invited to attend,” Van Hecke told a Los Angeles reporter, adding: “Recounting the story, he could not hold back weeping tears at the generosity of God to call him to love him.”

How wondrously providential to have recounted to a friend the still-vivid moment of one’s Christian awakening only weeks before death.

The Montecito businessman had made his fortune the hard way, building a highly successful real estate empire in Chicago. He later retired early and moved his family to California. I suspect he wearied of the snow and cold. This man was made for sun and action in every fiber of his being.

That said, once he discovered God, Rohter’s faith and its principles prevailed throughout. They anchored the foundation of his long and beautiful marriage to Theresa. They undergird his generosity, which included the founding and co-founding of three Catholic schools and helping several others.

Roy was intense, challenging, provocative, driven, immensely energetic, contagiously enthusiastic, fully himself and present to the moment, and yet always ultimately focused on the thing that matters most in life: Christ and his Church.  For me, it makes his sudden loss so shocking and so sad.  For those who knew him well, I can’t imagine the pain.

He has always asked friends and anyone who would listen to pray for him long after he died, and so I continue to do, sometimes in tears, along with many others.

Yet even amid the sorrow and shock of loss, and the gratitude for having known such a man,  there is still Roy, the engaging encourager of souls inviting anyone who will listen to embrace a journey with Christ.

Roy Rohter is still doing in death what he did in life, and more powerfully at that.

From the moment Roy’s death was confirmed and announced in the local news as the first victim of Montecito’s horrific, dead-of-night mudslides, his Catholic faith and its motivation for all he did in his earthly life boldly straddled news headlines—in print, radio, on TV and all over the internet.

News outlet after news outlet quickly picked up the local story, and continue to do so.

Headlines such as “Founder of Catholic school among those …” , “He Has Done So Much for So Many,…” , “Real estate agent, Catholic school founder…” , “Roy Rohter, Catholic Educator and Benefactor, Killed in CA Mudslide,” and many similar headlines continue to be plastered in online and offline news, both secular and faith-based, nationwide and internationally, including a big story in England’s popular Daily Mail, and far beyond.

This Catholic businessman’s life and death is, to me, the ultimate example of a Catholic business professional, of a life well-lived, such that even in death his life continues to proclaim the love of Christ, in season and out of season, for anyone willing to listen and embrace.

Roy Rohter, may you rest in peace, even as you continue in death the work to which you were called from Baptism. May you continue to help those of us in business to imitate your focus on persistent, strategic execution, leadership, engagement with others, and most importantly, on what matters most.