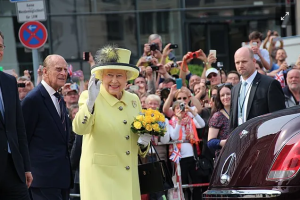 OldHollywoodandBeyond—That Queen Elizabeth II would end her earthly sojourn today, September 8, 2022, the Feast of the Birth of Mary, Mother of Jesus, is poignant and special.

On a personal note, as the Queen was getting ready to breathe her last, my 96-year-old father, recovering in the hospital, and I, said the Holy Rosary for her, asking Mary to intercede and preserve her life—unless God had a new role for her to play in Heaven. Of course, I could not help but feel that the latter was the case.

At mass, a half-hour later, which I attended to celebrate the feast day, the priest noted that this day, Mary’s birth, marks the beginning of civilizational renewal.

What a profound thought!

Then, arriving back at the hospital and seeing that last photo of Queen Elizabeth two days earlier, greeting the new Prime Minister, and seeing how white her fingers were, it seemed the end was near. Indeed, within a few minutes, it was announced that the Queen had died, thus assuming her new role in Heaven, helping, through her intercession, with that major task of civilizational renewal, which is so needed and is so clearly underway.

Truly, we are at the precipice.

But, with God all things are possible. And, it seems He wants us to pray, lest we think, when civilizational decay is averted, we did it! And, we can go on our merry way, not continuing to walk in his grace.

And, while it will surely take smart policy decisions, and fast—countering stunningly wrongheaded decisions of late on all manner of issues from crime to the economy to energy to national security—it will also take a serious spiritual renewal to heal what ails us. For the illness is, of course, not just of the body, but of the mind and spirit. The disease of all three synergistically serving to weaken us to the point of near collapse during the COVID pandemic, which the immune system of the body politic is now pushing back against. To wit. England banned the COVID “vaccine”— actually experimental gene therapy— for children under the age of 11, days before the Queen died. Which cannot be an accident. Quite clearly the experiment has failed. Fifty-percent of children were experiencing adverse reactions and as many as 25% had adverse health effects.

The Queen, herself, evidently experienced the ultimate adverse health effect, just over six months after testing positive for COVID in spite of being vaccinated, a deeply concerning eventuality about which I wrote in “And, now Queen Elizabeth.” I know something about the relevant issues, having nursed my father back to health after he contracted COVID at the hospital at Christmas.

But God allowed it and out of that great evil he will bring great good.

And, so, may Western civilization, built on the Christian faith that Queen Elizabeth was sworn to defend, as one of her main roles over 70 plus consequential years as England’s monarch, now enter a season of renewal.

Mary Claire Kendall is author of  Oasis: Conversion Stories of Hollywood Legends, published in Madrid under the title También Dios pasa por Hollywood. She recently finished Oasis II and is now working on a biography of Betty Hutton’s life.