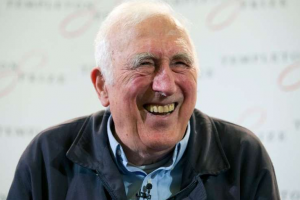 Jean Vanier, Champion and Friend to Intellectually Disabled, Founder of L’Arche, dies at 90

CNA—Beloved founder of L’Arche, Jean Vanier died May 7, at the age of 90. He died at a L’Arche home in Paris, where he had entered palliative care several weeks ago, after a protracted battle with cancer.

Vanier will be mourned by his friends: the weak, the indigent, the forgotten, the disturbed, the rejected, and the disabled.

His funeral Mass will be celebrated privately in Trosly, France, but will be broadcast globally for mourners who wish to remember him.

A man of great compassion and peace

Vanier will be remembered as a man of compassion and peace, a person of deep spiritual insight and gentleness. He spoke easily with scholars and leaders, with princes and popes, but he said often that he was most at home among the intellectually disabled people to whom he dedicated most of his life.

He was born in Geneva to Georges and Pauline Vanier. His father was a Canadian diplomat who would become Canada’s Governor General. He was educated in Canada, France, and England, his family lived in Paris and Switzerland. At 13 he entered the United Kingdom’s naval college, to prepare for commission as a naval officer. He served in the Royal Navy and the Royal Canadian Navy, until, at 22, he resigned his naval commission.

He studied philosophy at the Institut Catholique de Paris, completing a doctoral thesis on Aristotle’s approach to ethics and human happiness. He taught philosophy at the University of St. Michael’s College, Toronto.

Discovering his lifelong calling and vocation

When Vanier was 36, he left academic life. He began to assist a friend, Fr. Thomas Phillippe, OP, who had just become chaplain of the Val Fleuri, a French institution that was home to 30 men with intellectual disabilities. While there, Vanier visited a psychiatric hospital on the outskirts of Paris, which housed those with both mental illnesses and intellectual disabilities.  He was struck by the depravity of the conditions there, and the apparent loneliness of the residents.

Shortly thereafter, Vanier discerned in prayer that he should invite two men, Raphael Simi and Phillippe Seux, to live with him in a small house in Trosly-Breuil, France. He named the home “L’Arche,” or “The Ark.”

Life in that home did not begin easily. Eventually, Vanier later recalled, he realized that his housemates had need of friendship, that they suffered the pain and indignity of not being understood, and of loneliness.

“Essentially, they wanted a friend. They were not very interested in my knowledge or my ability to do things, but rather they needed my heart and my being,” Vanier wrote.

Their home, and soon a community, was formed around friendship, a common table, common chores, common celebrations, and common faith.

Within a few years, Vanier opened similar households nearby, and he sought help from others: young people, from France, Canada, England, Germany. As the community grew, the blueprint that became L’Arche was born.

L’Arche became 154 communities and more than 10,000 members. Until the late 1990s, Vanier oversaw the entire organization, while remaining responsible for the original L’Arche community as well. He penned 30 books, was feted with awards and honors from governments around the globe, and became a sought after speaker. He was a member of the Pontifical Council for the Laity and a regular visitor and correspondent with Pope St. John Paul II.

His time, until the end of his life, was committed to his friends in L’Arche. He traveled globally to support the foundation of L’Arche communities, and to imbue them with a spirituality grounded in his own Catholic faith, his reflection on the mystery of suffering, and his love for people with disabilities.

“I strongly believe that God is hidden in the heart of the smallest of all, in the weakest of all, and if we commit ourselves to him, we open a new world,” he wrote.

Pope Francis said of him May 7: “He was a man who knew how to read the Christian existence from the mystery of death on the cross of illness, from the mystery of those who are despised and rejected in the world. He worked, not only for the least of these, but also for those who before birth face the possibility of being sentenced to death. He spent his life like this. I am simply thankful to him and thankful to God for giving us this man with a great witness.”

He summarized the mission of his life in this way: “The most important thing is not to do things for people who are poor and in distress, but to enter into relationship with them, to be with them and help them find confidence in themselves and discover their own gifts.”