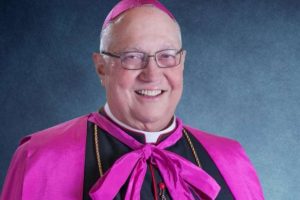 Bishop Morlino died at 9:15 p.m. at St. Mary’s Hospital, the diocese said in a statement that asked the faithful to “pray for the repose of his soul, for his friends and coworkers, and for all of the faithful of the Diocese of Madison.”

The announcement followed a series of increasingly urgent messages over the weekend on Facebook and elsewhere for prayers after Bishop Morlino suffered an apparent heart attack while undergoing medical testing.

At the bishop’s request, spokesman Brent King said late Friday, “the decision was made not to trouble people for Thanksgiving Day, but at this time it is appropriate to notify the faithful and all people of good will, and to request your prayers.”

By early Saturday evening, however, the diocese was seeking “urgent prayers” for Bishop Morlino, adding “our hope lays in a miracle” for the bishop’s recovery.

“Whereas yesterday morning held a number of good reasons for hope for the recovery of the bishop, today has been filled with a number of disappointments in that regard,” the diocese’s vicar general, Msgr. James Bartylla, said in a post on Facebook Saturday.

“Unfortunately, matters have continued to turn for the worst and it is likely that our hope lays in a miracle at this point,” Msgr. Bartylla said, adding, “I would ask that in addition to prayers for a miracle, you would also pray that if and when the time comes, the Bishop would be given the grace of a happy death and look soon upon the face of our God.”

“The all-night prayer vigil for Bishop Robert Morlino, at Holy Name Heights (702 S. High Point Rd, Madison) continues, now for the repose of his soul, ending with Benediction and Sunday morning Mass, said for his intention, at 8:00 AM,” said the Diocese on Facebook.

“Eternal rest grant unto him O Lord, and let perpetual light shine upon him. May he rest in peace.”
A more formal statement was released hours later.

Bishop Morlino was installed as the fourth bishop of Madison on Aug. 1, 2003. He previously served as Bishop of Helena.

A native of Scranton, Pennsylvania, Bishop Morlino was initially ordained a Jesuit priest in 1974. During his time as a Jesuit, he taught philosophy at several universities, including Loyola College in Baltimore, Boston College, and the University of Notre Dame.

In 1983, he became a priest of the Diocese of Kalamazoo. He was consecrated as a bishop in 1999. At the time of his consecration, he was preparing to become a full-time professor of theology at Detroit’s Sacred Heart Major Seminary.

In the statement announcing his death, the Diocese of Madison outlined Morlino’s three priorities as bishop. These were:

“All objective indicators point to the fact that Bishop Morlino accomplished what he set out to do in the diocese,” said the diocese. Morlino ordained 40 men during his 15 years as bishop, and there are another 24 seminarians in formation within the diocese. Additionally, there were “significant inroads toward encouraging the Catholic institutions in his care to live out their mission with greater fidelity.”

Bishop Morlino indeed lived up to his three priorities as bishop.

He kept his eye firmly on his priorities—and not merely to be accomplished for this present moment in time, but for the long haul.  By re-establishing firm foundations for each of his three priorities, Bishop Morlino ensured that these priorities would continue to bear fruit far into the future.

As reported in the Wisconsin State Journal in an article announcing Bishop Morlino’s death, “Under his [Bishop Morlino’s] tenure, more young men studied to become priests, Latin Masses have made a comeback in some areas and priests have been encouraged to use only boys and seminarians as altar servers…

“In his messages to the faithful, Bishop Morlino repeatedly focused on the Church’s opposition to abortion, embryonic stem cell research and same-sex marriage.”

In August of this year, Bishop Morlino released a pastoral letter saying the “homosexual subculture” within the Church was “wreaking great devastation.” He called for additional Masses of reparation and fasting, and promised to respond firmly to any allegations of sexual misconduct by members of the clergy or seminarians.

And just weeks ago, Bishop Morlino delivered an inspiring, well-grounded talk to attendees of a Napa Institute event in D.C. (see link to his beautiful homily in Related Resources below)

In its memorial attribution, the Napa Institute posted as follows:  “Bishop Morlino was a dear friend of the Napa Institute and a member of our Ecclesial Board of Directors. Just a few short weeks ago he joined us in Washington, D.C. as a speaker at the Authentic Reform Conference, where he urged attendees not to give in to the temptation to despair in these difficult times, reminding them that “our hope is in the name of the Lord who made heaven and earth.”

“Bishop Morlino will be greatly missed, and will be remembered for his deep love and devotion to Our Lord and His Church.

“Entrusting his soul to the Lord he served so well in this life, we pray, Eternal rest Grant unto him, O Lord, and let perpetual light shine upon him. May he rest in peace.”

The Funeral Mass for Bishop Morlino has been set for Tuesday, December 4, 2018, at St. Maria Goretti Catholic Church on Madison’s Southwest Side.