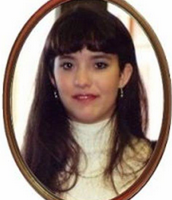 As She Lay Dying after a Tragic Hiking Accident, Angela Baird’s ability to draw on her faith left a lasting impression on those around her

On the surface, there might seem to be little extraordinary about her death other than that her family and friends will dearly miss the energetic girl with the long brown hair and bright green eyes. But those who were with Angela as she died tell of a deep inner peace and heroic unselfishness in her last hours. The

details surrounding her death offer tremendous insight into the true meaning of life and the inestimable value of suffering.

Angela was with a group of seven other students Nov. 5 on a hiking trail in Los Padres National Forest, located behind the Catholic campus, when she lost her footing on an overhang and fell 70 feet onto the rocks below.

Jon Daly, a junior, who was following her on the trail, quickly headed down after her, calling out for someone to run back to the campus for help.

“I found her at the bottom [of the ravine] on her back and conscious,” explained Daly. An experienced rock climber, he knew Baird was hurt, but didn’t know how badly. “I knew we were going to stay there until the paramedics arrived,” he said, explaining that he checked her pulse and covered her with blankets to keep her warm.

It was three hours before the paramedics could get to the site.

“We prayed the whole time,” said Daly. “I asked her what she wanted to pray for. The first thing she said was to pray for aborted babies, then she said to pray for her dad and to her guardian angel. She was peaceful the whole time. After a little while it was hard for her to speak. I told her we’d pray out loud and she could pray in her heart.”

With her ready permission, Daly put a rosary in her hand that she clutched the entire time.

“The thing that moved me the most as I look back on it now,” said Daly, ” is the prayers for the aborted babies and her father–it’s so beyond me. It was selfless of her to pray for them as [seriously injured as she was]. That’s amazing and beautiful to me.”

Prayers for a Friend

John Finley, also a junior at the college, agreed. Finley was on campus when the news came that a student had been seriously injured on a hike. Aware of the inaccessibility of the trail and that help would be slow in arriving, he and another student grabbed what medical supplies they could and ran the four or five miles to offer their assistance.

“I was amazed that she was alive and conscious after falling from that height,” said Finley. “When we finally heard the helicopter coming, you could see her smile a little, she had a definite awareness of her surroundings.”

Paramedics immediately started IVs and examined her injuries before tackling the tough, 20-minute

climb back to the helicopter–a climb that could not have been comfortable for Angela in a stretcher, Finley noted.

Meanwhile, on the 217-student campus, about 40 students had gathered in the chapel to pray rosary after rosary for their injured friend. Many others were gathered on the soccer field, praying and anxiously awaiting news from the helicopters return.

“The college got news that someone was hurt, we didn’t know who at the time, at about 8:00 pm, and immediately the whole college came out,” said Father Bartholomew De La Torre, one of the college chaplains. “The chapel was filled; those who couldn’t get in the chapel were outside. It was very impressive, people just poured out to help each other.”

Near 11:30 p.m. Angela arrived at the emergency room of Ventura County Hospital, where dean of students Dr. Paul O’Reilly met her and Father De La Torre administered the Sacrament of Anointing before she went into emergency surgery.

When news that her injuries were life-threatening reached the college, students went door to door inviting any who were not yet in the chapel to join in prayers. The entire student body poured out and continued praying.

When college president Tom Dillon announced that Angela hadn’t survived the surgery, “there were streams of students–now in the early hours of the morning–in tears but in prayer, all concerned about her and her family and praying together.”

“She touched all of us,” said Dr. Jeffery Robinson, the ER physician who treated Angela. “She had that sort of gentle spirit that you recognize. [We were struck by] her courage to be down there for two-and-a-half hours, the incredible pain she must have been in, and yet having so much faith in God. She was so calm, so rational, and so understanding of what needed to be done.”

Although she suffered a broken spine, several compound fractures in her legs and arms, a large gash in one leg, another on her head, and injuries to her pelvis, it was massive internal bleeding and injuries to internal organs–common in such a long fall–that caused her to die on the operating table around 1:00a.m.

“We see tragedy all the time in here,” sighed Dr. Robinson, who broke the news of her death to the dean, chaplain, students, and her brother in the waiting room. “But, I have to say that in 10 years, this is the most devastating thing I’ve had to go through. She was awake in the helicopter when they were bringing her in, she was awake when she got here and we still couldn’t save her.”

Dillon and O’Reilly noted that the outpouring of support for Angela’s family has been tremendous, not only from the campus community but also from the extended college community of alumni and benefactors, including spontaneous gifts totaling more than $5,000 to defray funeral costs, a donation of seven airline tickets for students to attend the funeral, more than 1,000 rosaries and Masses from separate alumni and student spiritual bouquets, a memory book with notes and letters from students to her parents, and a $100,000 gift for an Angela Baird Memorial Scholarship Fund from a member of the college’s board of governors.

The following week, a procession of 40 students mounted a hand-made, six-foot-high wooden cross

with an inscription above the place where she fell. They also diverted the path so that no one else would encounter the same fate.

“The whole community has been wracked by grief,” said Dillon. “When I learned about the details of her last hours, I was very edified and moved, [both by the students who helped her and by her prayers]…She prayed for the unborn and for her father. Her last hours were spent in prayer and in charity. She died a holy death and there’s great consolation in this.”

But Angela’s strength of character in turning her last hours so completely to God did not happen without preparation. Her mother noted that Angela had been teaching catechism to inmates at a women’s prison, two of whom she sponsored for confirmation last year. And, true to the pro-life sidewalk counseling work she started on her own initiative in the ninth grade, earlier this year Angela had organized a small group of students to pray in front of a local Ventura abortion clinic every Thursday, a day when abortions were performed. On the afternoon of Angela’s death, 80 students prayed in front of the clinic. Most Thursdays now, a group of 20 students pray for mothers and their unborn babies.

Notable was an interior conversion in Angela that seemed to have started last year and intensified during the last two months. Father De La Torre noted that “It seemed that she was learning to use  sufferings to get closer to God as a way of rising above it. It seems like habituating herself on how to deal calmly with the little aggravations of everyday life prepared her to deal with this tragic catastrophe so calmly. Last year she was a typical restless teenager and this year she had become a calm, prayerful, peaceful woman; you could tell she was carrying a cross but she was joyful.”

Her brother Joe agreed, saying that God had prepared her for this.

“As her brother, I felt like I had to be a good example to her, but starting last year and in particular the last few months, I could see her faith deepening. I saw her faith and her devotion to our Lord increase beyond anything I ever imagined possible; she became an example to me.”

Others noticed something interiorly different, saying that this year Angela attended daily mass, compline and rosary and would often be seen in one of two small campus chapels throughout the day.

“She would sneak away to be in the chapel, but never tell anyone about it,” said Joe.

“Suffering is itself an evil, we don’t want to suffer, nor did Christ want to suffer,” said Dillon. “But he came here to suffer for our sins and for our salvation, so the value of suffering comes from uniting it to the suffering of Christ.”

“One of the things we talked about at the hospital after learning of her death,” added O’Reilly, “was that

suffering would be meaningless without having the belief that Christ rose from the dead. It would be depressing and something to be avoided. But in her case suffering did have meaning. Angela followed in the footsteps of her Savior, taking him up on his command to take up your cross and follow him.”

In spite of the sorrow of her parents and nine siblings, Angela’s mother sums it up well: “You can’t help but be happy to see that she really did achieve that Christian ideal every parent hopes for their child. As Catholic parents we want our children to get to heaven, to be saints, to live holy lives, and at 19 she did that in remarkably less time that it will take most of us.”

Angela’s father later told a group of survival leaders that “the purpose of suffering is to soften our hearts.”

Indeed, it seems Angela’s heroic response to her last agony was the fruit of a developed habit of embracing little daily sufferings and offering them to Christ with joy.

This article was first published in the National Catholic Register, November 30, 1997, and is reposted on a beautiful memorial website maintained by Angela Baird’s family: https://www.bairds.net/ 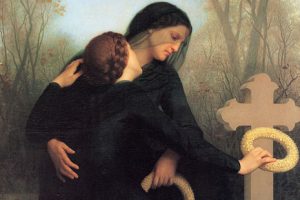 The Commemoration of All the Faithful Departed
Daily Mass Readings »