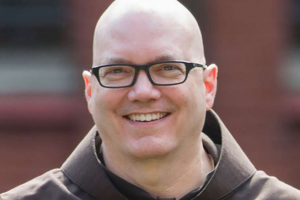 CNA—A Franciscan friar is the first person known to have died as a result of coronavirus (COVID-19) in the District of Columbia.

The friar, who also was a permanent deacon, had been in residence at the Franciscan Monastery of the Holy Land in America from the 1980s until September 2019, Father Larry Dunham, superior of the monastery, told CNA March 22.

Laird-Hammond, 59, had been battling leukemia for years, Dunham said, and had been temporarily living alone to better concentrate on his cancer treatments.

A shock to the community

Dunham stressed to CNA that Laird-Hammond was not in residence at the monastery at the time that he contracted COVID-19.

“When he informed me by text that he was in the hospital and that the doctors initially were suspecting COVID-19, it came as a complete shock,” Dunham told CNA.

“That he is the first coronavirus death in the District only saddens us more for all the victims of this terrible plague.”

DC Mayor Muriel Bowser had announced the District’s first death related to the virus on Friday but did not reveal the person’s identity.

Laird-Hammond had recently been approved for a transfer to a friary in New York, where he was going to be involved in fundraising efforts for missions in Central America, according to the Washington Post.

Dunham said prior to accepting the new assignment, the friar had decided to take “a small leave of absence” to better deal with his leukemia— hence why he was not in residence at the monastery when he contracted the virus.

“It was going to be like a whole new focus and life for him,” Dunham told the Post.

“That was to be his new assignment that never quite materialized.”

A priory of the Order of Friars Minor, the Franciscans, has had a mission to support Christians in the Holy Land, and to serve as custodians, or guardians, of the sacred sites of the Holy Land since 1342. The Franciscan Monastery in Washington, DC is affiliated directly with that mission.

A priest in the Diocese of Yakima, Washington was the first U.S. priest known to be diagnosed with COVID-19 on March 15. A second U.S. priest, Fr. Stephen Planning, SJ, president of DC’s Gonzaga College High School, announced this week he also has the virus.   In Italy, at least 30 priests so far have died of the coronavirus.

The global tally of confirmed cases of the COVID-19 coronavirus worldwide is now over 300,000.