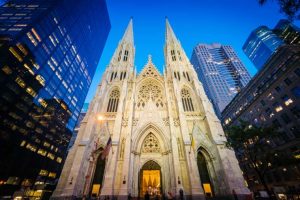 CNA—The man who attempted to enter New York’s St. Patrick’s Cathedral carrying gasoline, lighter fluid, and a lighter will face criminal charges. The attempted entry was the second time this week the man was arrested at a Catholic cathedral.

Marc Lamparello, 37, was apprehended April 17, 2019, by St. Patrick’s Cathedral security around 8 p.m. and taken into police custody by officers with the NYPD Critical Response Command. He apparently intended to start a fire, and police said he had a car nearby to escape the scene.

Not the first time

Earlier this week, Lamparello was arrested for refusing to leave the Cathedral Basilica of the Sacred Heart in Newark, New Jersey.

On Monday evening, Lamparello refused to leave the Newark cathedral when it was closing. He was seated in a pew, and told a sheriff’s deputy that he would only leave the cathedral in handcuffs.

“If you want me to leave tonight, you’re gonna have to handcuff me and arrest me tonight and take me to jail,” he told the officer.

According to the Daily Beast, Lamparello resisted attempts by two officers to take him into custody, apparently throwing himself on the church floor and telling them “I’m not leaving. God wants me here. I know all the sins the priests have committed.”

He was charged April 15 with criminal trespassing and resisting arrest.

NYPD have also confirmed that Lamparello had recently purchased a one-way airplane ticket to Rome, scheduled to depart Thursday evening.

According to the NYPD, Lamparello had four gallons of gasoline, two cans of lighter fluid, and two lighters with him when he attempted to enter St. Patrick’s Cathedral Wednesday night. He was prevented from entering by cathedral security, but was able to spill some of the gasoline on the floor as he was leaving.

About 90 minutes before he attempted to enter the cathedral, Lamparello pulled up to the church in a minivan. He then wandered around for about an hour, before taking the gasoline, lighter fluid, and lighters out of his car. He tried to go into St. Patrick’s around 8 p.m. and was apprehended shortly thereafter.

NYPD said that Lamparello’s story was “not consistent” and suspicious, though they have not yet determined any sort of motive. He claimed he cut through the cathedral as a shortcut, as his van had run out of gas. The minivan had in fact not run out of gas, which led to police taking him into custody. Lamparello was reportedly cooperative and conversational with police.

Police do not suspect terrorism, and have described Laparello as “emotionally disturbed.”

Lamparello graduated from Boston College, a Jesuit school, in 2004. Since then, he has been a philosophy instructor at several universities, including Seton Hall University in New Jersey. Seton Hall is a diocesean Catholic school administered by the Archdiocese of Newark. He previously worked as a music director for a Catholic parish in New Jersey.

His brother, Adam Lamparello, told the Daily Beast that he was “shocked” to hear of his arrest, and said that “this is something that is so not him.”

“We are all focused on keeping our congregations and houses of worship safe as they celebrate this Holy Week,” tweeted de Blasio.

“Thank God the FDNY has been extraordinarily vigilant and helpful, because we’ve got a wooden roof too,” said Dolan.