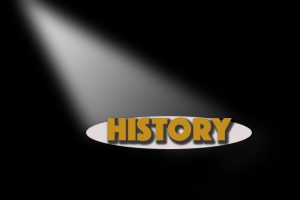 In what might seem like an odd twist, Catholic Business Journal, the nation’s pre-eminent news source focusing on faith and work, faith and business, today introduces a new column on…. history!

“In business schools,” notes Karen Walker, founder and publisher of Catholic Business Journal, “and in our individual quests to become more adept in our business achievements, we learn from those who proceeded us. Same in studying finance and wealth management. We study the mistakes as well as the successes of the past. That makes us better in business, gives us an edge in perspective and nimbleness of mind in problem-solving and growth. The same is true of wider history. It gives us invaluable perspective.”

“Without an accurate knowledge of history, of what humans did and especially what Catholics did—for better or worse—before our current generation, we do not know or appreciate the contributions of those on whose shoulders we stand today,” says Walker. “This stunted understanding of history clouds our own vision, even as business professionals. It affects us in ways that are beginning to bear unfortunate fruit.”

“As individuals and as a society and culture without a true sense of history, we lose genuine perspective, we lose our bearings and we become vulnerable—some would say destined—to repeat the errors and horrors of the past,” Walker continues. “That is especially true for Catholic business professionals, who—regardless of what level they have achieved in work, regardless of young or old—are influencers and leaders among their business colleagues, families, friends, parish and diocese. We are called to be salt in the world, enlivening and enlightening the world for Christ. The fruit of our prayer life is enhanced by knowledge of history.”

The situation is dire

Today’s students, even in Catholic schools, are not learning the same history that their parents or grand parents learned, says Walker. “It’s a travesty of epic proportions and yet mostly ignored or unrecognized by even Catholic educators and pastors. This is beginning to change, but not nearly fast enough.”

She adds: “There are entire generations of younger adults, including Catholics, who may know vague facts or vignettes about some of the more popular saints, but who have no knowledge—zero—of the actions, courage, bravery, thinking, circumstances and historical context of the men and women on whose shoulders we stand today.

“Saint stories learned in Catholic school are viewed as separate and distinct from history, as though somehow saints were not real men and women with real passions and challenges, notes Walker. “Saints are viewed as somehow disjointed from the everyday life and issues of their eras. But that is completely false. Without studying history—not social studies, but history—how are today’s students to realize that they too have a role, as Catholics, in the history being made today?”

“It is likewise false that flawed characters and flawed understandings embraced by historical figures because of the historical context of their era are therefore unworthy of honor and praise bestowed on them by previous generations, many generations, for the remarkable heroism or achievements they accomplished, often at great personal sacrifice,” the Catholic Business Journal publisher says.

“Yet today in K-12 and in colleges across the U.S., students are learning from modern textbooks that have whitewashed historical reality in the name of political correctness. For example, entire generations now believe Columbus, a devout Catholic, was a bad guy. They have no sense of his remarkable contributions to history. Think of it, Columbus was like the Steve Jobs of his day, an innovator in exploration just as Jobs was an innovator in life-changing, useful tech gadgets. Neither Columbus nor Jobs were perfect, sinless human beings, but in terms of historical contributions, my goodness!”

Acknowledging there are many excellent, well-researched and first-hand sources of history, the Catholic Business Journal will primarily cull fodder for its new column from the exceptional, historically accurate, even-handed and engaging history textbooks for Catholic schools that are produced by Catholic Textbook Project, praised by bishops as well as by top, award-winning secular university professors, and currently in use in Catholic schools in more than 100 dioceses nationwide.

To explore the new column, go to Catholic Business Journal (CatholicBusinessJournal.com) and search for “This Week in History.”