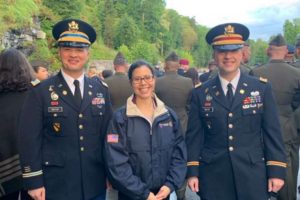 Lourdes, France, May 18, 2019 / 12:00 pm (CNA)—Every pilgrim to Lourdes has their own motivations and reasons for making the journey. For the Mayors, the International Military Pilgrimage came with an additional grace: a family reunion.

While the two have been stationed together in the past, they now live a continent apart. Mark is stationed at USAG Wiesbaden, in Germany. Matthew is stationed at Ft. Jackson, SC, but is a student at Northwestern University through the Army Advanced Civil Schooling program.

Last year, Mark and his wife, Malori, were both pilgrims on the “Warriors to Lourdes” trip. Malori, a registered nurse, volunteered on the medical team, assisted with helping wounded pilgrims, and played the violin at Mass throughout the weekend. This year, all three of the Mayors made the journey to Lourdes.

Mark and Malori told CNA they are taking a different approach towards this year’s pilgrimage. Last year, they said they both came with a “spiritual agenda,” and were praying for a specific intention. This year, they said they are instead coming to Lourdes with an attitude of gratitude, and will be more relaxed about the experience.

“Coming with an agenda, though, was something that I think was a mistake, last year,” said Mark. This year, he intends to seek wisdom, something that he thinks he and his wife were inadvertently granted last year as well.

During the 2018 pilgrimage, Malori and Mark were praying they would conceive a child. This did not immediately happen, but Malori thinks that she received the gift of courage to break down the stigma and taboo of infertility. She used her blog to share stories about infertility and to inform her readers about holistic, natural, Church-approved methods of tackling fertility.

“I think that’s what we needed, that was our miracle for last year, even though we came with an agenda, God gave us the wisdom to seek out the right resources,” said Mark. “I think that’s the key takeaway with this pilgrimage.”

Malori is now expecting their first child, who is due in January 2020.

“Even before I became pregnant, though, I was kind of reflecting on last year’s experience at Lourdes, and realizing that I need to come here with a different posture, a different attitude; not ‘give me what I want, right now, on my timeline,’ but to just come with gratitude,” she explained.

This gratitude is “not necessarily for infertility–that would be very, very hard to be grateful for that cross itself,” but rather for how she and her husband have grown through this experience together.

Matthew told CNA that he had first learned of the Warriors to Lourdes pilgrimage through his brother and sister-in-law, and was inspired to apply for this year. He said that he came into Lourdes with an open mind, and that he is seeking healing for both physical and mental wounds.

“My only expectation is to come here with an attitude of gratitude, to be thankful for the blessings that I have in my life right now,” said Matthew. Matthew also explained that he is looking forward to fellowship with members of the military, as the transition from living on a base to living in the civilian world can be jarring and lonely. The chance to interact with others is “a huge deal for me, to have that fellowship” he said.

Both Mark and Matthew have suffered from their time in the military, and both have been diagnosed with having post-traumatic stress. Mark also experienced a traumatic brain injury. They both spoke about the importance of civilian interaction with members of the military after they have returned home, as they both believe this is key to preventing and treating mental illnesses that many troops experience.

When a member of the military returns home, Mark explained, they are “separated from the tribe,” which can trigger depression and other mental wounds. The International Military Pilgrimage is a way for people to “get the tribe back together,” and is a therapeutic experience for the pilgrims. And while the pilgrims are from different nations and from different branches of the military, Mark is comforted by the fact that they are all in Lourdes to worship God.

“We all celebrate one universal Catholic faith,” said Mark. “It’s just something that I find it really humbling.”

Lourdes is famous for its baths, which have produced 70 confirmed miraculous healings, and hundreds of other cures. The Mayors say they have all been deeply touched by their experiences taking a dip in the ice-cold water.

Malori called her trip to the baths “life-changing,” and said that it came with a sense of peace. Matthew agreed, saying it was an “eclectic and powerful experience.”

“My intentions were for continued healing in body, mind, and spirit, and for the grace of continued wisdom to fulfill and refill my well of fortitude,” said Matthew. He said he was grateful and thanked God for being present for him in that moment.

All agreed that Lourdes is a special place, and that the addition of the pilgrims attending the International Military Pilgrimage only increases the town’s unique sense of holiness.

“Minus all the people coming here with illnesses and wheelchairs, maybe this is a little bit of what like Heaven is,” said Malori. “Everyone’s so peaceful and all these different countries coming together at the military pilgrimage–maybe this is like a taste of that.”