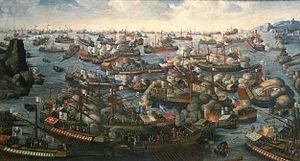 The Battle of Lepanto: The Battle that Saved Christian West and A Lesson for Our Times

On October 7, the Feast of Our Lady of the Rosary, more than on any other feast day, I feel especially emboldened in faith and hope, no matter what the anti-common sense, anti-life, anti-Christian news of the day!  The reason is simple.  The power of praying the Rosary was manifest in such a remarkable, historical and tangible way on this day — at the Battle of Lepanto — that Pope Pius V declared it to be a Feast in honor of Our Lady of Victory (which later became the Feast of the Most Holy Rosary).

Subsequent popes altered the feast name to Our Lady of the Rosary to more fully reflect what was done (and what we can still do today) to achieve Our Lady’s victory, namely the unceasing Rosaries prayed by all of Christendom for the battle outcome.  Even the soldiers on ship decks, led by the Don Juan of Austria, fasted, confessed and prayed the Rosary before engaging in battle.  Similar scenarios throughout history have echoed the Power of the Rosary, even in this 21st Century (which will be featured in later articles).

So, what is this famous battle that literally turned the tide for Christendom, against the relentless, aggressive and ravishing conquest of Christian nation after nation by the Ottoman Turkish Islam empire–the same conquest that turned Constantinople, a former seat of Christian Faith, into what is now called Istanbul?

The Battle of Lepanto took place in 1571.  A newly formed Holy League, a navy culled by Pope Pius V from among Christian nations at the time to defend Christendom against the seemingly invincible Islam Turkish Ottoman Empire, fought a decisive — thought by some historians to be THE decisive battle–in the suffocating conquest of Christian nations by the Muslim empire.   But the Holy League Christian ships did not win the battle on their own. It would have been nearly impossible given the odds.   Pope Pius V ordered that all of Christendom pray the Rosary to stop the Islam forces that day.  Even the rough fighting troops knelt down on the deck of their ships, some of them exhausted and battle-worn from previous fighting, to pray the Rosary before engaging the fresh forces of Islam.   And, during that remarkable battle, something miraculous happened…

I encourage you to read two of the best articles available on the Battle of Lepanto, one is  written by Christopher Check, executive vice president of The Rockford Institute, who served for seven years as a field artillery officer in the U.S. Marine Corps, the father of four boys who lectures on topics in military and Church history.  His original article appears in Catholic Answers’ This Rock magazine, and may be found here.  The second article on the Battle of LePanto is found in The New American and can be found here.

An abbreviated section of Mr. Check’s article on the Battle of Lepanto appears below:

It was at dawn on October 7, 1571, the Holy League rowed down the west coast of Greece and turned east into the Gulf of Patras. When the morning mist cleared, the Christians, rowing directly against the wind, saw the squadrons of the larger Ottoman fleet arrayed like a crescent from shore to shore, bearing down on them under full sail.

Don John knelt on the prow of Real and said a final prayer. Then he stood and gave the order for the Holy League’s battle standard, a gift from Pius V, to be unfurled. Christians up and down the battle line cheered as they saw the giant blue banner bearing an image of our crucified Lord.

The fleets engaged at midday. The first fighting began along the Holy League’s left flank, where many of the smaller, swifter Turkish galleys were able to maneuver around Agostin Barbarigo’s inshore flank. The Venetian admiral responded with a near impossibility: He pivoted his entire….

…The fighting lasted for five hours. The sides were evenly matched and well led, but the Divine favored the Christians, and once the battle turned in their favor it became a rout. All but thirteen of the nearly 300 Turkish vessels were captured or sunk and over 30,000 Turks were slain. Not until the First World War would the world again witness such carnage in a single day’s fighting. In the aftermath of the battle, the Christians gave no quarter, making sure to kill the helmsmen, galley captains, archers, and Janissaries. The sultan could rebuild ships, but without these men, it would be years before he would be able to use them.

Our Lady of Mercy and Grace, through our daily devotion to the Rosary, help us in business to be instruments of your Son’s peace,  charity in truth, and justice for all, especially for the unborn and elderly.