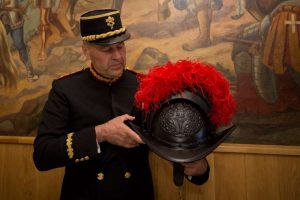 CNA—As the Swiss Guards celebrated their 513th anniversary Tuesday, they donned for the first time their new light-weight helmets, which are made of black PVC and 3D printed.

The plastic helmets replace those made of metal, which were easily dented, and which would get so hot from the Roman sun in the summer months they could cause blisters on the guards’ ears.

Printed in Switzerland, the new helmets were unveiled by Swiss Guard Commander Christoph Graf during a press conference last May, but were formally added to the uniform Jan. 22 as part of the anniversary celebrations of the world’s smallest-but-oldest standing army.

Per tradition, the day’s anniversary festivities began with Mass in the Church of Santa Maria della Pieta in the Vatican’s Teutonic College, followed by a march of the Swiss Guards from the chapel to the Swiss Guard quarters on the opposite side of Vatican City.

The march follows a path under the Arch of the Bells and across St. Peter’s Square in commemoration of the arrival of Swiss mercenaries to the Vatican on Jan. 22, 1506, the year the Swiss Guard was founded.

Also on Jan. 22, the Guard released the first in a series of short videos illustrating the daily life of a Swiss Guard. The series, called “1506-The Swiss Guard Presents,” will publish new videos throughout the year on the 20th of every month.

The first 3-minute-long video is called “Service of Honor,” and shows the guards as they go about their various duties; it also includes clips from the State visit of Swiss President Alain Berset with Pope Francis Nov. 12, 2018.

The series was created by Vatican Media and the Rome-based film company Officina della Comunicazione.

The Vatican’s Swiss Guard barracks is currently undergoing a renovation, which the website says was needed because it has not been renovated since the 19th century, had a lack of proper insulation, and had started to become run-down.

The three buildings being renovated encompass the area of the troop of the halberdiers (the lowest rank of the Guard), the canteen, administrative offices, and the cadre and family housing.

The renovation will be funded by the Vatican and by the Swiss Guard Foundation, which will conduct fundraising in Switzerland and abroad.