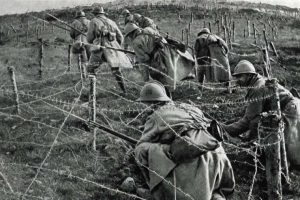 After 100 years, US Catholicism still bears the stamp of World War I

A century after the close of World War I, the war has faded from living memory. But its effects endure.

President Woodrow Wilson had campaigned for re-election on a promise he would keep the country out of war. But subsequent events, including the discovery of a German telegram promising American territory to Mexico in the event of war, led to the U.S. entry into war in April 6, 1917.

The country of barely 100 million people joined a conflict involving 15 other countries.

According to figures from the U.S. Department of Justice, World War 1 witnessed the fall of long-standing governments, took 8.5 million lives, and wounded more than 21 million in combat alone. American casualties numbered 53,000 killed in battle and 200,000 wounded.

Days after U.S. entry into war, Cardinal James Gibbons of Baltimore wrote to then-President Wilson, pledging that the bishops and Catholics as a whole were ready “to cooperate in every way possible with our president and our national government, to the end that the great and holy cause of liberty may triumph, and that our beloved country may emerge from this hour of test stronger and nobler than ever.”

American Catholic reaction to the war came in a time when Catholics were still a patchwork of immigrant groups, themselves divided in attitudes towards assimilation, ethnicity and their lands of origin.

“Before the war, and especially before the turn of the century, the hierarchy of the American Catholic Church was dominated by Irish bishops, but the parishes were often drawn up along ethnic lines,” Matthew J. O’Brien, a history professor at Franciscan University of Steubenville, told CNA. “But in the years leading up to the war, a number of…bishops tried to curtail ethnic parishes in favor of territorial parishes, trying to foster greater assimilation into American society.”

“After the declaration of war in 1917, more Catholics stressed their military service rather than question the war effort, although there were ethnic newspapers that lost their mailing licenses during wartime for charges of sedition,” he added. “The effect of sedition laws was more indirect than direct, but they contributed to the overall pressure for Catholic Americans to ‘keep their heads down’.”

Many Catholics served with great prominence, such as the U.S. Army regiment known as the Fighting 69th. Part of the historic Irish Brigade under the New York Army National Guard, it was still disproportionately Irish at the time of the war. The regiment was federalized and sent to Europe as the 165th Infantry Regiment.

The Catholic convert and poet Joyce Kilmer was a member of the regiment. His poetry featured deep piety, and at least one poem, “Trees,” still endures in popular memory: “Poems are made by fools like me / But only God can make a tree.”

The week of heavy action killed or wounded half the men of the regiment.

The division’s chaplain, the Canadian-born Father Francis Duffy of the Archdiocese of New York, was responsible for boosting the morale of the soldiers and comforting the wounded in hospitals. As a Catholic priest, he would say Mass and move through the trenches after an artillery bombardment to give last rites to the dying.

Another of his primary duties as a chaplain was to bury the dead.

“I knew these men so well and loved them as if they were my younger brothers. It has been the saddest day of my life. Well, it is the last act of love I can do for them and for the folks at home,” he said in his diary at the conclusion of one battle, according to the New York archdiocese archives’ exhibit “The Great War and Catholic Memory.”

When the division learned of the armistice two days late, on Nov. 13, 1918, the troops celebrated. But the priest recorded in his diary: “I could think of nothing except the fine lads who had come out with us to this war and who are not alive to enjoy the triumph. All day I had a lonely and aching heart.”

Kilmer and Duffy served with another Catholic who would rise to prominence: William “Wild Bill” Donovan. Donovan would receive the Congressional Medal of Honor for his wartime service, and during the Second World War he would head the Office of Strategic Services, the U.S. covert agency that was predecessor to the Central Intelligence Agency.

The Fighting 69th became “the best-known face of Catholic soldiers in the U.S. Army,” O’Brien said. “Although they were linked by an overarching Irish-American imagery, they also proudly included Catholics from other ethnic backgrounds and Jewish-Americans as well.”

Its image became “iconic” due to the 1940 movie of the same name, which according to O’Brien had a “strong message of ethnic pluralism.”

As for Duffy, his influence would continue. He was a ghost writer for New York Gov. Al Smith during controversy over whether the Democratic presidential candidate’s Catholic faith would interfere with his ability to be president. Since 1937, five years after his death, his statue has stood in Duffy Square in the northern triangle of New York’s Times Square. It shows a priest standing before a 17-foot tall Celtic Cross.

At a time when Catholic bishops avoided forming national organizations, it was during World War I when the U.S. bishops organized the unprecedented National Catholic War Council, a forerunner to the U.S. Conference of Catholic Bishops. In the 1920s the council, whose name had been changed to the National Catholic Welfare Council, proved an important platform for many programs and causes. It led the national response to an attempt to ban Catholic schools in Oregon backed by the anti-Catholic Ku Klux Klan and the Scottish Rite Masons.

This council also proved to be the seedbed for future leaders like Msgr. John A. Ryan, who was “strongly influenced by the social justice message of Rerum Novarum,” the encyclical of Pope Leo XIII, O’Brien said. Ryan would play an important role in the Roosevelt administration and was a counterweight to the polemical populist “Radio Priest” Father Charles Coughlin, who turned towards anti-Semitism and fascism during the 1930s.

But during World War I, it was anti-German sentiment that ran high. Many German-Americans were Catholic.

“German communities often toned down their ethnic displays, especially in the Midwest,” O’Brien said. “The number of German-language newspapers in cities like Milwaukee dropped precipitously, and some school districts actually stopped offering German as a language elective for high-school students.”

“In some ways, World War I left many Catholics in a vulnerable position,” O’Brien said. “The two largest ethnic groups who opposed the American entry into the war were German and Irish Americans, both of whom drew the ire of President Woodrow Wilson. Pope Benedict XV’s call for a negotiated peace also prompted some Americans to question whether the Pope secretly favored the Central Powers (although there is no evidence for this).”

The war’s Catholic critics have had little prominence in history, but their lives too are being revisited. Benjamin Salmon, one of the few Catholic conscientious objectors to the war who even declined a non-combatant role, was a strict foe of all war to the point where he seemed to reject Catholic just war theory.

His writings against the war were censored by the U.S. Post Office. The New York Times claimed he was a suspected spy, and other newspapers ridiculed him as a coward and a slacker. He was convicted in a civilian court, then convicted in a military court despite never being inducted as a soldier.

Salmon was initially sentenced to death, with his sentenced later reduced. He spent a long period in solitary confinement and his 135-day hunger strike resulted in forced feeding.

Finally released after a pardon in 1920, he had to move to Chicago with his wife and son to avoid animosity in Denver. He continued to be a devout Catholic, with a son and a daughter entering the priesthood and religious life, respectively. Some of his devotees asked the Archdiocese of Denver to consider opening his canonization cause in 2015, the Denver Post reported.

Men and women who sought to support the war effort included the Knights of Columbus, whose members provided relief work staff and helped raise more than $14 million for recreation centers for soldiers stationed in Europe.

After the war Cardinal Gibbons’ Sept. 26, 1919 pastoral letter to U.S. Catholics, praised their demonstration of “traditional patriotism” and their devotion to “the cause of American freedom” in wartime.

He also reflected on the “spiritual suffering” of those involved in the war: sorrow, hopelessness and moral evil.

“For we may not forget that in all this strife of the peoples, in the loosening of passion and the seething of hate, sin abounded. Not the rights of man alone but the law of God was openly disregarded. And if we come before Him now in thankfulness, we must come with contrite hearts, in all humility beseeching Him that He continue His mercies toward us, and enable us so to order our human relations that we may both atone for our past transgressions and strengthen the bond of peace with a deeper charity for our fellow men and purer devotion to His service,” the cardinal wrote.

He said a spirit of “union and sacrifice for the commonweal… found its highest expression in the men and women who went to service in distant lands. To them, and especially those who died that America might live, we are forever indebted. Their triumph over self is the real victory, their loyalty the real honor of our nation, their fidelity to duty the bulwark of our freedom.”

“To such men and their memory, eulogy is at best a poor tribute,” he said. “We shall not render them their due nor show ourselves worthy to name them as our own, unless we inherit the spirit and make it the soul of our national life. The very monuments we raise in their honor will become a reproach to us, if we fail in those things of which they have left us such splendid example.”