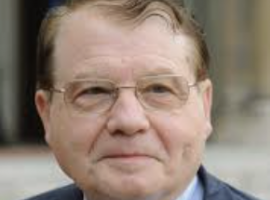 The current coronavirus analysis and findings of Nobel Prize recipient Luc Antoine Montagnier and his peers are not only fascinating, but they deliver insight about Covid-19 (SARS-CoV-2) that few could discern. These findings do not seem to be commonly heard on sound-byte mainstream news.  The article below does a good job of exposing these scientific findings in an easy-to-understand manner.

We believe this article exemplifies the reality that when scientists, doctors and professionals at every level stand in wonder and truth, open to discover truth rather than to alter it to fit anyone’s or any entity’s agenda, it is the only way problems are genuinely solved.—ed, Catholic Business Journal


Communal News—Coronavirus continues to be on all the news around the world. Currently, there are over 2.2 million cases and over 150,000 deaths. Some countries such as Spain starting to ease the social distancing and reopening slowly businesses. In North America the coronavirus pandemic continues to roar.

China continues to resist providing any additional information pertaining to coronavirus vital data that would help the world be able to decipher its origin. Originally, a now deceased doctor who was voicing concern about the unknown virus in Wuhan was accused by the Chinese government of false statements and he was even given a warning. After his death, he was exonerated, because China’s social scoring system effects the whole family.

Additionally, when a Chinese lab posted on open source the gene sequence of the virus in January 2020, the lab was mysteriously shut down within 48 hours. China’s non-compliance and given the trajectory of the virus qualifies Chinese government officials  for crimes against humanity and to be tried in the Hague.

Now Nobel Prize winner and virologist Luc Antoine Montagnier has stated that the coronavirus origin is in fact from the lab. Montagnier is a French virologist and joint recipient with Françoise Barré-Sinoussi and Harald zur Hausen of the 2008 Nobel Prize in Physiology or Medicine for his discovery of the human immunodeficiency virus. His work focuses on retroviruses, which are viruses whose genomes consist of RNA and whose genes can be incorporated into host cells’ DNA.

In 1983, Montaigner and Barré-Sinoussi discovered a retrovirus in patients with swollen lymph glands that attacked lymphocytes – a kind of blood cell that is very important to the body’s immune system. The retrovirus, later named Human Immunodeficiency Virus (HIV), proved to be the cause of the immunodeficiency disease AIDS.

This discovery has been crucial in radically improving treatment methods for AIDS sufferers. He also specifically stated that coronavirus contains HIV particles. Given his background and recognized work, it is clear he is qualified to provide such analysis.

The scientist studied the virus in the smallest detail, which allowed him to detect elements of HIV in SARS-CoV-2. As was reported very early at Communal News, an Indian lab confirmed in February 2020 that the coronavirus had at least four protein inserts from HIV that suggests it’s bio-engineered as a biological weapon.

The virus itself is odd as it can live on cold and warm blooded hosts, which is highly unlikely to occur naturally. There are also 3 types of coronavirus that are circulating around the globe.

When the work of the Indian scientists was published, India felt [that it came] under huge pressure and it was speculated that the World Health organization, behind the scenes, tried to suppress these findings to aid China. US President Donald Trump pulled funding from WHO and also accused the organization of China favoritism. WHO made the call too late and consequently is vicariously liable for the spread of the COVID-19 as well.

Luc Montagnier claims that coronavirus was accidentally released, during the time China was trying to invent a vaccine against AIDS. Mongtagnier is 100% sure the virus is designed by molecular biologists.

Christina Kitova spent most of her professional life in finance, insurance risk management litigation. Her work interests include economics, journalism, writing, finance, nanotechnology, quantum physics, culture, education and animal rights. She is fluent in 6 languages and has resided in Western Europe and North America for the past 25 years.