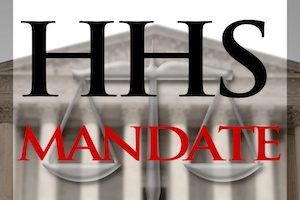 Secretary of Health and Human Services (HHS) Xavier Becerra sent a letter instructing providers to perform abortions in emergencies — regardless of state law — under the Emergency Medical Treatment and Active Labor Act (EMTALA) on July 11.

But there are TWO patients who need care in pregnancy…

“Catholic health care agencies and providers are committed to the same goals intended by EMTALA,” Dr. Marie Hilliard, co-chair of the Catholic Medical Association‘s Ethics Committee told CNA. “They are dedicated to providing the highest standard of care to both the mother and her unborn child without directly compromising either one in the process.”

She added: “In fact, by the consistently high quality of care it is known to provide, Catholic health care has demonstrated that both can be beautifully served.”

Enacted in 1986, EMTALA ensures that every person who enters an emergency room is treated and stabilized, regardless of their insurance status or ability to pay.

The Centers for Medicare and Medicaid Services (CMS), a division of the HHS, also issued a memorandum July 11 with the same instruction found in Becerra’s letter.

EMTALA “protects your clinical judgment and the action that you take to provide stabilizing medical treatment to your pregnant patients,” Becerra wrote, giving the examples of patients with ectopic pregnancy, complications of pregnancy loss, or emergent hypertensive disorders.

He also listed what “stabilizing treatment” might be necessary under these conditions. That included abortion.

“Thus, if a physician believes that a pregnant patient presenting at an emergency department, including certain labor and delivery departments, is experiencing an emergency medical condition as defined by EMTALA, and that abortion is the stabilizing treatment necessary to resolve that condition, the physician must provide that treatment,” the letter reads. “And when a state law prohibits abortion and does not include an exception for the life and health of the pregnant person — or draws the exception more narrowly than EMTALA’s emergency medical condition definition — that state law is preempted.”

The letter followed President Joe Biden’s executive order in which he directed Becerra to identify steps to ensure that patients, including “pregnant women and those experiencing pregnancy loss,” receive the “full protections for emergency medical care afforded under the law.”

Abortion is not health care

Hilliard, who holds an advanced degree in maternal-child health nursing and is a canon lawyer and an ethicist, repeated that Catholic health care treats two patients with every pregnancy.

“Catholic health care agencies and providers have managed these same health crises of mother and baby consistent with EMTALA law and best practices over the decades, while respecting the health and dignity of both,” she said. “They consistently, ‘provide stabilizing medical treatment’ to their pregnant patients.”

Abortion, she said, is not necessary.

“Treating a pathology of the mother does not require a direct attack on the unborn child,” she added. “In fact, these diagnostic and procedural codes, used for reimbursement even for federal funding, are distinct from coding that constitutes a direct abortion.”

Among other things, she called it inconsistent with the U.S. Catholic bishops’ Ethical and Religious Directives for Catholic Health Care Services. The directives stress that Catholic health care institutions are not to provide, or in any way help provide, abortion procedures.

The HHS letter “admonishes a provider to violate hospital policy…when such actions are not necessary,” Hilliard wrote.

Instead, she said, Catholic health care is already in accordance with the law.

The CMS memo “speaks to the need to protect the ‘life and health of the pregnant person’ which is consistent with existing federal law and which Catholic providers also are committed to maintaining,” she said.

She took issue with the HHS letter for omitting the definition of “health.” The letter only gives examples of an “emergency medical condition,” while EMTALA itself is explicit in its definition, she said.

It also includes a nod to the unborn.

Hilliard cited EMTALA’s definition of an “emergency medical condition” as “a condition manifesting itself by acute symptoms of sufficient severity (including severe pain) such that the absence of immediate medical attention could reasonably be expected to result in placing the individual’s health [or the health of an unborn child] in serious jeopardy, serious impairment to bodily functions, or serious dysfunction of bodily organs.’”

The omitted definition in the HHS letter “is misleading especially considering the language in Doe v. Bolton,” Hilliard warned.

Decided the same day as Roe v. Wade, Doe v. Bolton broadly defined what “may relate to health,” in regards to a woman obtaining an abortion, including “all factors — physical, emotional, psychological, familial, and the woman’s age — relevant to the wellbeing of the patient.”

“Doe v. Bolton when paired with Roe opened the door to all abortions, medically necessary or not, based on how the physician and mother defined ‘health,’” Hilliard wrote. “It became a subjective standard which, if applied in this case, would force the Catholic hospital to allow all abortions on demand.”

Hilliard accused the administration of overreach in an attempt to counter the Supreme Court’s recent decision in Dobbs v. Jackson Women’s Health Organization to overturn Roe v. Wade. The ruling leaves abortion policy up to each state.

At least one state — Texas — is pushing back.

On July 14, Texas filed a complaint against the HHS, CMS, and their leadership for their instruction regarding EMTALA. The state condemned the “Abortion Mandate” as an “unconstitutional exercise of authority” that “must be held unlawful and set aside.”

Texas accused the Biden administration of attempting to “use federal law to transform every emergency room in the country into a walk-in abortion clinic.”

“The Emergency Medical Treatment and Labor Act (EMTALA) that Defendants cite as the basis for their Abortion Mandate does not authorize—and has never authorized—the federal government to compel healthcare providers to perform abortions,” the complaint reads.

Among other things, Texas argues that the new guidance conflicts with the Hyde amendment, which prohibits federal dollars from funding abortions except in cases of rape, incest, or the life of the woman, and the Weldon amendment, which bars federal agencies from discriminating against health care entitties “on the basis that the health care entity does not provide, pay for, provide coverage of, or refer for abortions.”

“No federal statute confers a right to abortion,” the complaint says. “EMTALA is no different. It does not guarantee access to abortion. On the contrary, EMTALA contemplates that an emergency medical condition is one that threatens the life of the unborn child. It is obvious that abortion does not preserve the life or health of an unborn child.”