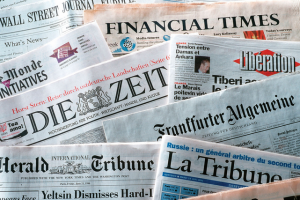 Media moguls are resigning at a head-spinning rate, an irrational reaction that’s setting impossible standards and ceding immense power to an unreasonable group of fringe ideologues. This last week has been ridiculous. It may ultimately prove to be a turning point in our culture, one that will cause much further strife.

Top editors are rapidly resigning over allegations of racial insensitivity—most of which are correctable or forgivable if they’re accurate—legitimizing the radical left’s inane and counterproductive policing of our politics and culture. And it’s their own fault. They’ve used elite media platforms to embolden these irrational actors for years. They are failing to meet the standards they’ve promoted. The power transfer is now officially complete. That’s more than a little unnerving.

Christene Barberich, the top editor and co-founder of Reinfery29, resigned over allegations the publication has a “toxic company culture.” Claudia Eller, editor in chief of Variety, landed two months on administrative leave for calling a critic “bitter” in a Twitter conflict. Legendary Vogue publisher Anna Wintour is now under fire.