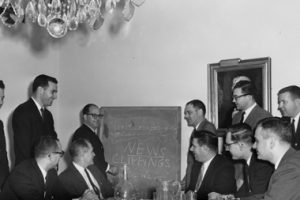 On The Mentors Radio: Harold Burson, the Godfather of PR

We tend to think of PR as a relatively modern practice, a product of our sophisticated but oh-so-shallow consumer society.

But communication finessed with a little persuasion has long been a feature of human culture.

Power and ideology are the glues that hold us together and PR has always been the way that they have been projected. Without it, there is no way of sharing a view of the world, no common purpose, no rallying of the troops.

“Public relations is synonymous with persuasion and my belief is that PR was applied as soon as people communicated,” explains Burson-Marsteller co-founder Harold Burson.

“Rome did not have those wide boulevards because it had traffic jams. They were built to demonstrate to the world the power and the glory of Rome. We have always tried to persuade one another.” He could have cited the pyramids, Stonehenge, the cave paintings at Lascaux or the current Winter Olympics in Sochi.

That’s the thing with Burson. You get historical perspective.

At 93, the amiable godfather of PR, founder of one of the world’s largest PR networks, the teenage interviewer of William Faulkner and reporter on the Nuremberg trials after World War Two, has lived history.

In fact he has been alive for virtually the entire existence of the modern PR industry. And although he does not say it explicitly, he clearly feels that removed from the heat of current operations it is one of the privileges – and duties – of age to look at the past and draw lessons for the present and the future.

You could dismiss much of it as the moaning of an old man that “it’s not like it was in my day”. But an advantage of his advanced age is precisely that he can remember when the world wasn’t like it is now.

In his thoughtful way he sees that many of the things we take as axiomatic are not inevitable, but choices we have taken as a culture, and we may not even be aware that we have made these choices.

The practice of PR in its modern form originated in the US in the last quarter of the 19th century, largely in response to…. Read More>>