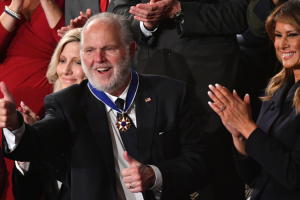 It Doesn’t Matter Who You Are, It Always Comes Back to Faith: Rush Limbaugh, stage 4 lung cancer, Congressional medal of Freedom

He was awarded the Congressional Medal of Freedom at last night’s State of the Union, not because everyone agrees or disagrees with him, not because he is has followed his passion, done what he loves and attracted as of 2020 an audience of 27 million, but because Rush Limbaugh tirelessly, and with entertaining humor appreciated by many (but not all), stands up for the principles of God-given individual human freedom and the rule of law–the basis on which you and I are free to work, live and raise our children in the Faith.  Others do this well, but an audience of 27 million indicates this man has done it exceptionally well.

Now enduring Stage 4 lung cancer at the still-young age of 69, the layers of privacy begin to peel away and the core of what anchors a person —any person—begin to be revealed publicly.

Our lives are never perfect.  God “writes straight with crooked lines” as he patiently waits for us to find Him, more and more deeply.  He is unchanged.  We become changed over time, and often due to our biggest failures.

What is always true is that, at the core of every human person who strives to be interiorly better, we find a surrender to God at work.  For Kobe Bryant, it was his Catholic Faith that anchored him through his worst failures and highest joys and achievements.  For Rush Limbaugh, it is a deepening relationship with God. —ed, CBJ

Fox News reports Limbaugh, 69, said he will take some days off for further medical tests and to determine treatment, but hopes to return soon.

“This day has been one of the most difficult days in recent memory, for me, because I’ve known this moment was coming,” Limbaugh said. “I’m sure that you all know by now that I really don’t like talking about myself and I don’t like making things about me… one thing that I know, that has happened over the 31-plus years of this program is that there has been an incredible bond that had developed between all of you and me.”

The radio host then told his listeners that his job has provided him with the “greatest satisfaction and happiness” of his life.

“So, I have to tell you something today that I wish I didn’t have to tell you. It’s a struggle for me because I had to inform my staff earlier today,” he said. “I can’t help but feel that I’m letting everybody down. The upshot is that I have been diagnosed with advanced lung cancer.”

Limbaugh called himself the “mayor of Realville” in announcing his illness. He’d been experiencing shortness of breath that he initially thought might be heart-related but turned out to be a pulmonary malignancy.

“I told the staff today that I have a deeply personal relationship with God that I do not proselytize about, but I do, and I have been working that relationship tremendously,” Limbaugh said. “I am, at the moment, experiencing zero symptoms.”

Limbaugh said he plans to undergo further testing and will  “push ahead and keep everything as normal” as he can.

“I felt that I had to tell you because that’s the kind of relationship that I feel like I have with those of you in this audience,” he said. “Over the years, a lot of people have been very nice, telling me how much this program has meant to them but, whatever that is, it pales in comparison to what you all have meant to me.”… Read More>> 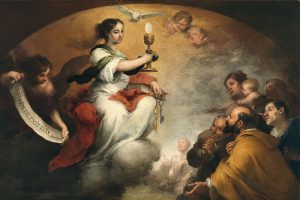