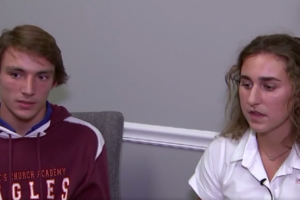 Two Florida teens lost in the ocean prayed for help; Saved by a boat named Amen

God is the great communicator.  He knows us each individually better than we know ourselves.  He speaks to us in ways that best suit our individual personalities, and has done so from the beginning of time, literally.

For the apostle Thomas, also known through the centuries as “doubting Thomas,” Our Risen Lord told him to touch the marks left by the nails in his hands and the spear in his side at the Crucifixion just days earlier.

For two, 17-year-old Florida teens enjoying a class-wide skip day at Vilano Beach, near St. Augustine, their fun day took a turn for the unexpected and life-threatening.

Without warning, a strong current dragged the teens far from shore, and then farther and farther.

Nearly two hours passed as they managed to stay afloat, flailing and shouting for help. But at this point, Tyler Smith and Heather Brown had grown weak and exhausted. Hope dimmed.

They began praying with absolute abandon.

Smith recounts to CNN affiliate WJAX that he cried outloud to God, praying: “If you really do have a plan for us, like, come on. Just bring something.'”
That’s when they saw the “Amen.”
“The first words that came out of my mouth [when they pulled her aboard] were, ‘God is real,'” Brown told WJAX.

Their condition ocean had deteriorated so much that by the time they were pulled into the boat named Amen, Smith and Brown were shivering uncontrollably and could barely talk.

The crew covered the teens with blankets and towels. Luckily, the rescued pair warmed up and were talking normally about 10 minutes later, according to the boat crew.

Eric Wagner had purchased the “Amen” just six years ago.  He couldn’t have imagined that the boat one day would be the answer to two Florida teenagers’ prayers. In fact, he had recently been considering renaming the boat.

According to the story in CNN, concurred by other reports, Wagner and his crew were sailing the 53-foot yacht from Delray Beach, Florida, to New Jersey last month when they heard “a desperate scream” over the engines, wind and choppy waves.
They were about 2 miles off shore, so Wagner didn’t believe his ears at first.
Then the boat crew saw an arm flailing in the water behind them.
“It was kind of surprising we heard them. Especially when they were 150 yards away, almost 200 yards away,” Wagner said. “But it was definitely the scream that we heard, and that’s why we were looking around.”
As CNN further reports:
Wagner said the rescue has strengthened his faith.
“There were too many coincidences, in my opinion, for this to be a coincidence,” he said. “I truly believe it was divine intervention. It had nothing to do with me. I was just put there at the right place at the right time and I did the same thing anyone else would have done, pulled them aboard.”

And, just for the record, Wagner no longer plans to change the name of his boat.