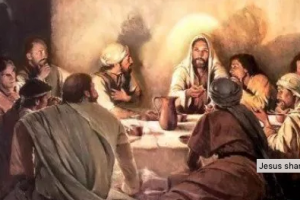 The Eucharist through the Eyes of a Jewish Catholic

I’ll always remember the taste of haroseth and horseradish on a matzah cracker. At first it’s sweet and nutty with a hint of red wine and then the horseradish pummels your sinuses and your eyes start to water. My siblings and I competed to see who could stand the most burning. It was our ritual, our tradition, on Holy Thursday evening.

My mother was raised Jewish and had learned the Hebrew prayers for the Seder meal; she also learned how to make some of the traditional foods like haroseth and challa. My father was also raised Jewish and when he and my mother became Catholics they wanted to keep some of the Jewish traditions they had learned as children. So Holy Thursday dinner was matzah ball soup and lamb, leaning to the right, leaning to the left, drinking the four “cups” and asking the “four questions.”

“Why is this night different from all other nights?”

For me, the Seder, that night, was different. Besides the unusual food and horseradish contest, I felt connected to something different. I felt that I could touch or feel a different world, or perhaps that world touched me. And maybe it was more than just something different; I think it may have also been someone different.

I suppose each one of us stands behind a boundary or limit in some way, in our own Egypt as it were. Passover felt different for me because someone was breaking through that boundary, someone who wanted to know me and save me. As the years have passed I have come to realize that same “someone” is present in the Eucharist. He continues to reach out and break through at every Mass.

We often speak of the Eucharist as transcending time and space. While Christ’s death and Resurrection happened at a specific moment in time and place, the power of that moment extends to all time and space.

In fact, that moment is outside of time and space; it is not past, it is not future, it’s eternal.

Christ’s body is in every tabernacle but at the same time relates to the physical world in a non-physical way. His physical presence defies the laws of physics; his temporal presence defies the laws of time. And yet, at every Mass, He pierces the veil to touch each one of us as we live in time and space. Just as Passover for me as a child was an experience of someone breaking through, so also in the Eucharist, Jesus breaks through.

Since eternity is beyond our finite understanding, the Old Testament expressed the concept in terms to which we can all relate.

Eternity is not simply unending time, but that is the easiest way for us to imagine it, like a road that goes on forever. Thus for example, a common expression is found in Psalm 72 which speaks of Christ’s eternal reign. “May he endure as long as the sun.”

In the same way, God commanded the Israelites to keep the Passover as a “perpetual memorial.” Perpetual, however didn’t simply mean, again and again and again. On the night of Passover there was a sense that “this night is very different.” There was a sense that somehow the events of Egypt were happening now, outside of time. As a child I had sense, however vague, that somehow I was present in Egypt or Egypt had jumped forward to my own time. Whichever way I looked at it, I had a sense that “that night” was happening now; not past, not future, just now.

Each one of us has our own Egypt, temporal, physical, spiritual, or emotional. Whatever the barrier is, it can become an obstacle to connection with another person. We can become trapped on the wrong side of the Red Sea.

In the Eucharist Jesus wants most of all to break through that barrier, to connect with each of us in exactly the way that we need Him to.

Time and space are the most insurmountable barriers. When they separate us from loved ones we can feel more helpless than ever before. If you’ve ever grieved the death of a loved one you’ll understand what I mean. We live in our world defined and regulated by time and space, the dead have entered into another in which time and space are totally different.

Pope Benedict XVI described the liturgy as a type of child’s game; a type of make-believe in anticipation of “life,” that is, of the life of heaven.

When we celebrated the Seder meal as children, it did feel a little bit like a game, or even a school play. We had scripts and props and when we drank we would lean to the left or lean to the right.

The children asked “why is this night different from all other nights?” in four different ways:

The answer to each question reminded us of our slavery in Egypt: the bitter herbs of our toil, the saltwater of the tears we shed, the unleavened bread of the haste with which we fled, and reclining of the fact that we are now free in the Promised Land.

These questions were part of our reenactment of what happened thousands of years ago. It was a game but I felt that something about it was very real.

I was thousands of miles from the physical land of Israel and all the people who crossed the Red Sea had been dead for millennia. And yet, somehow I felt connected to them.