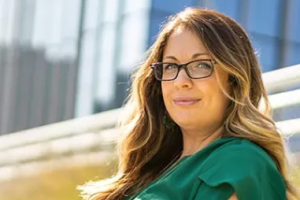 CNA/ADF—The Supreme Court’s fall term features a major case that will push the question of religious liberty back into the national spotlight as the court determines whether or not a Colorado woman can be forced to violate her religious beliefs about marriage.

Lorie Smith, an artist and small business owner, is challenging a Colorado state law for her right to refuse creative services when they conflict with her religious beliefs.

Smith, the plaintiff in the case, 303 Creative vs. Elenis, is suing members of the state’s government —

including the director of the state’s civil rights division, Aubrey Elenis — in a challenge to a Colorado law that would require her to design websites celebrating same-sex marriages, something she opposes as a Christian.

Smith is being represented by Alliance Defending Freedom (ADF), the same conservative legal nonprofit that represented fellow Coloradan Jack Phillips in the well-known Masterpiece Cakeshop case that went to the Supreme Court in 2018.

“Colorado is trying to compel [Smith] to celebrate and create custom work for marriages that she doesn’t agree with,” Matt Sharp, senior counsel for ADF, told CNA in an interview.

“This is ultimately about whether our Constitution protects artists like Lorie, who simply want to be able to serve everyone but not create all messages,” he added.

Smith is the owner of 303 Creative, a graphic- and website-design business based out of Denver that she has run since 2012.

According to her testimony, Smith believed that God was calling her to “promote and celebrate his design for marriage” by making custom wedding websites for heterosexual couples. Smith detailed her belief in the sanctity of biblical marriage to potential clients and on her website.

“As a Christian who believes that God gave me the creative gifts that are expressed through this business, I have always strived to honor him in how I operate it,” Smith’s website reads. “Because of my faith, however, I am selective about the messages that I create or promote.”

While Smith states that she serves “anyone,” she is selective about not communicating and promoting ideas or messages “that are inconsistent with my religious beliefs.”

The complaint explains that Smith would “gladly” create designs for LGBTQ-identifying clients “so long as the custom graphics and websites” do not violate her religious beliefs, just like she would not create designs celebrating abortion or sexual immorality.

But the same Colorado law that punished Jack Phillips for refusing to bake a cake celebrating same-sex marriage is the one Smith argues is preventing her from expressing her religious beliefs.

Colorado’s Anti-Discrimination Act (CADA) bans discrimination in places of public accommodation, including on the grounds of sexual orientation and marital status.

According to the original complaint filed by ADF, Smith argued that CADA violated her rights by declaring it illegal for her to decline to design websites that celebrate same-sex marriages.

“Solely because of Colorado law, Lorie and 303 Creative are refraining from expressing their views of God’s design for marriage [and] from offering their services to design, create, and publish wedding websites expressing their desired message celebrating and promoting marriage as an institution between one man and one woman,” Smith’s complaint explains.

Represented by ADF, Smith challenged the law before the U.S. Court of Appeals for the Tenth Circuit in July 2021. Though the court of appeals ruled against her, Chief Judge Timothy Tymkovich dissented.

Tymkovich called the majority’s holding “unprecedented” and said that “[t]he Constitution protects Ms. Smith from the government telling her what to say.”

Smith then appealed to the Supreme Court, which granted her petition for review in February.

ADF will argue Smith’s case before the Supreme Court this term on the grounds that the Colorado law violates her freedom of speech.

CADA states that it is discriminatory and illegal for businesses to “publish, circulate, issue, display, post, or mail any written, electronic, or printed communication, notice, or advertisement” that communicates that a person’s patronage is “unwelcome, objectionable, unacceptable, or undesirable” on the basis of sexual orientation or marital status.

“Our argument is that free speech is for everyone,” Sharp told CNA. “No one — no artists, no American — should ever be forced by the government to say something they don’t believe in.”

“In Lorie’s case, the state of Colorado is misusing its law to force her to speak messages that she disagrees with as it relates to marriage. Lorie has long served everyone, people from all backgrounds and walks of life. But she doesn’t create all messages,” Sharp said.

“What she is seeking is the freedom to be able to create custom graphic design websites that celebrate weddings consistent with her view of marriage,” he added.

Smith’s case closely resembles that of the widely-known Masterpiece Cakeshop case in which Colorado baker Jack Phillips was sued by a same-sex couple for declining to bake a cake celebrating their union.

After the couple sued Phillips for discrimination, ADF represented him in state court. The battle ultimately went to the Supreme Court, which voted in favor of Phillips in a 7-2 decision.

However, Sharp says the ruling did not address the issue at the heart of the case.

Sharp explained that several Coloradan commissioners and government officials compared Phillips’ religious beliefs about marriage “to being no different than those that justified the Holocaust,” prompting the Supreme Court’s rationale.

“When the Supreme Court ruled for Masterpiece Cakeshop and Jack Phillips, it focused on the hostility that the state of Colorado showed towards Phillips’ beliefs about marriage, specifically during the hearings,” he said.

In the court’s opinion, Justice Anthony Kennedy wrote that “the Commission’s treatment of Phillips’ case … showed elements of a clear and impermissible hostility toward the sincere religious beliefs motivating his objection.”

Sharp says this meant the Supreme Court “didn’t have to reach the free speech question of whether Jack’s artistry through cake design is protected by the First Amendment.”

Upon winning at the Supreme Court, Masterpiece Cakeshop was immediately sued again for refusing to bake a cake celebrating a gender identity transition.

Smith’s case, if decided favorably by the Supreme Court, would bode well for Phillips.

“Lorie’s case goes directly to that question that was left unanswered in Masterpiece: Does the Constitution protect the right of artists like Lorie, Jack, and others to create consistent with their beliefs and not be punished or coerced by the government to speak otherwise?” Sharp said.

“We are hopeful that the Supreme Court will affirm this and that the ruling would also help Jack and other artists across the country that are facing similar threats to their free speech,” he concluded.

Sharp told CNA that “a win for Lorie truly is a win for everyone.”

“Should the government force an LGBT website designer to design something for a Catholic organization that wants to celebrate their view of marriage? Or should the government be able to force a Democrat ad person to do ads for a Republican candidate? I think we’d all say ‘of course not,’” he said.

“The government should never have the authority to force artists to create messages to celebrate events or ideas that violate their own beliefs.”

“The only matter that seems to offend the consciences of these few Catholic and Christian business leaders is same-sex marriage. So let’s not call this a case of ‘religious liberty.’ Let’s call it what it is: homophobia,” Martin said in a long tweet thread that drummed up widespread controversy on the platform.

The only matter that seems to offend the consciences of these few Catholic and Christian business leaders is same-sex marriage. So let’s not call this a case of “religious liberty.” Let’s call it what it is: homophobia.

One commenter said in reply, “Respectfully, as a gay Catholic myself, I disagree. In a free society, people shouldn’t be compelled to say anything they don’t want to, including, ‘Congratulations on your marriage!’”

“Gay Catholics and their supporters should stand up for the conscience rights of their fellow Christians, even when our consciences lead us in different directions,” he added.

Respectfully, as a gay Catholic myself, I disagree. In a free society, people shouldn’t be compelled to say anything they don’t want to, including, “Congratulations on your marriage!”