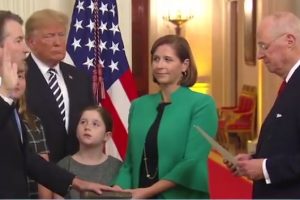 Justice Kavanaugh Approved and Sworn in

On Saturday evening, October 6, U.S. Supreme Court nominee and now-former member of the U.S. Court of Appeals for the District of Columbia Circuit, Brett Kavanaugh, 53, was confirmed by the U.S. Senate 50-48.  Immediately following the confirmation, Kavanaugh was officially sworn in as a U.S. Supreme Court Justice by Chief Justice John Roberts and retired Justice Anthony Kennedy.

In his remarks, Justice Kavanaugh noted:

“… I take this office with gratitude and no bitterness. On the Supreme Court, I will seek to be a force for stability and unity. My goal is to be a great Justice for all Americans and for all of America. I will work very hard to achieve that goal.

“I was not appointed to serve one party or one interest, but to serve one nation. America’s Constitution and laws protect every person of every belief and every backgrounds. Every litigant in the Supreme Court can be assured that I will listen to their arguments with respect and an open mind. Every American can be assured that I will be an independent and impartial Justice devoted to equal justice under law.

“As in the past, our nation today faces challenges and divisions. But I am an optimist. I live on the sunrise side of the mountain. I see the day that is coming, not the day that is gone. I am optimistic about the future of America and the future of our independent judiciary, the crown jewel of our constitutional republic.

“As a Justice on the Supreme Court, I will always strive to preserve the Constitution of the United States and the American rule of law.”

Rather than providing a description or commentary on short talks given by President Trump and Justice Kavanaugh, see and hear for yourself in this short video of the event.