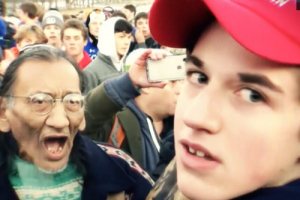 National Review—Nicholas Sandmann, the Covington Catholic High School student who sued major news outlets in the aftermath of their coverage of a controversial interaction he and several of his classmates had with a Native American activist, said Friday that he has settled his libel lawsuit against the Washington Post.

“On 2/19/19, I filed $250M defamation lawsuit against Washington Post. Today, I turned 18 & WaPo settled my lawsuit,” Sandmann wrote in a tweet Friday morning, adding that he thanks his lawyers, his family, and “millions of you who have stood your ground by supporting me.”

BATTLE NOT OVER YET

“I still have more to do,” Sandmann added.

Sandmann sued the Post and other major news outlets after their coverage portrayed Sandmann and his classmates as racist and aggressive towards Nathan Phillips, an elderly Native American man, during a confrontation near the Lincoln Memorial on January 18 of last year.

Viral video of the incident showed Sandmann, who was 16 at the time, and Phillips standing face to face as Phillips loudly beat on a drum inches away from the Kentucky high schooler’s face while Sandmann smirked. NBC asserted that Sandmann “blocked” Phillips and “did not allow him to retreat” during their interaction. Longer versions of the video showed that Phillips approached Sandmann, who stood mostly still during the incident. Before the encounter between Sandmann and Phillips members of the Black Hebrew Israelites, a militant black nationalist group, began a confrontation with the teenagers, taunting and shouting slurs at them.

Sandmann and his classmates wore “Make America Great Again” caps and were attending the annual anti-abortion March for Life, while Phillips was participating in the Indigenous Peoples March.

In January, CNN settled Sandmann’s multimillion-dollar defamation lawsuit against them for an undisclosed amount of money. The suit cited the… read more>>