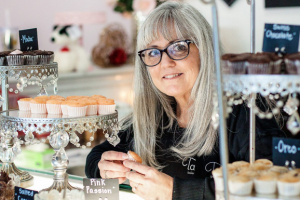 Cake designer Cathy Miller has been vindicated in the California courts for practicing her Christian principles on the job. On October 21, 2022, attorneys from the Thomas More Society law firm brought home a First Amendment victory for the cake shop owner of Tastries, a popular Bakersfield, California, bakery that was targeted for abiding by her faith and natural law principles. The ruling, handed down by Judge Eric Bradshaw of the Superior Court of California in Kern County, decided for Miller in a lawsuit brought against her by the Department of Fair Housing and Employment.

“We applaud the court for this decision,” stated Thomas More Society Special Counsel Charles LiMandri, partner at LiMandri & Jonna LLP. “The freedom to practice one’s religion is enshrined in the First Amendment, and the United States Supreme Court has long upheld the freedom of artistic expression.”

Miller had been the target of multiple lawsuits after a lesbian couple had asked her to create a wedding cake and she referred them to another baker.

Miller’s polite refusal to design a custom cake for a homosexual union was rooted in her sincere religious belief that marriage is intended to be between one man and one woman.

The legal action against Cathy’s Creations, Inc., brought by the Department of Fair Housing and Employment was filed under California’s Unruh Civil Rights Act, which provides protection from discrimination by business establishments on the basis of race, ethnicity, or religion.

“There’s a certain irony there, observed Paul Jonna, Thomas More Society Special Counsel and partner at LiMandri & Jonna LLP “that a law intended to protect individuals from religious discrimination was used to discriminate against Cathy for her religious beliefs.”

Jonna also pointed out that Miller does not have fringe beliefs.

“Cathy believes in the Bible,” said Jonna, and recalled how Miller was harassed by opposing attorneys for her adherence to its teachings.

A February 24, 2022, deposition in the case records an attorney for the state needling Miller:

Attorney Gregory Mann (attorney for the state): Do you try to follow everything that the Bible says?

Mann: Do you follow some of the eating practices from the Old Testament in terms of not eating pigs, not eating shellfish, et cetera?

“The state was actually questioning the sincerity of Cathy’s faith,” remarked Jonna, noting the Tastries is bountifully adorned with Christian décor, and even plays Christian music over its audio system.

“The fact that they called Miller’s open and sincerely held beliefs into question is almost as disturbing as quibbling over her status as an artist,” Jonna commented.

Definition of a “cake artist”

The Institute of Culinary Education clearly labels cake designers as “cake artists” who practice the “Art of Cake Decorating,” and observes that cakes have a known history dating back to ancient Egypt and are created with the finest and most expensive ingredients as an “act of celebration.”

It was this celebration of a marriage between two people of the same sex, that Miller could not condone in accordance with her Christian beliefs, explained LiMandri, during the July 25, 2022, closing arguments before Judge Bradshaw.

Miller would have been happy to sell the two women a pre-made cake, added LiMandri, but declined to grace their celebration with her personal artistry in a custom cake, which would be tantamount to approval, which Miller could not give.

Read the court decision for yourself

Read the decision issued on October 21, 2022, 2022, issued by Judge J. Eric Bradshaw of the Superior Court of California, County of Kern, in Department of Fair Employment and Housing v. Cathy’s Creations here [ https://thomasmoresociety.org/wp-content/uploads/2022/10/BCV-18-102633-Decision.pdf ].