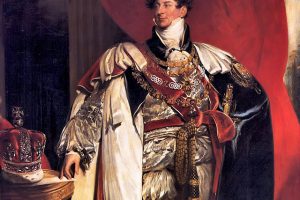 This Week in History: Parliament Emancipates Catholics on April 13, 1829

Conditions did not improve when George IV became king in 1820. As regent for his insane father, George III, since 1811, George IV had long supported the repression of radicals. Though a clever man (he was a student of the classics and fluent in French, Italian, and German), George IV was not a particularly good man. He was notoriously immoral and so did not mind the corruption that filled the British government. This made the new king very unpopular.

Though he spent most of his time at Windsor Castle, George IV continued to play a part in politics. He opposed all reform measures, including one that he himself had supported over 20 years before — Catholic emancipation. Since the 16th century, English law had forbidden Catholics to serve in Parliament or even to vote for members of Parliament. Penal laws carrying punishments of fines, imprisonment, and even death (for Catholic priests) were still on the books. In Ireland, though most of the population was Catholic, only Protestants could serve as magistrates; and everyone whether Protestant or not, had to pay tithes to support the Protestant Church of Ireland. Though in 1797 George IV had proposed a bill that would allow Catholics to sit in Parliament, by 1813 he was a firm opponent of similar bills. George IV now said his kingly oath to support the Protestant religion meant he had to oppose any efforts for Catholic emancipation. William Cobbett was among those calling for Catholic emancipation. He had returned to England in 1819. Beginning in 1824, the Political Register began publishing a series of letters called The History of the Protestant Reformation in England.

Cobbett was a member of the Church of England, but his History praised the Catholic Church. Cobbett said he wrote his History to prove that, before the Reformation, “England was more powerful and more wealthy, and that the people were more free, more moral, better fed, and better clothed, than at any time since that event.” Cobbett said he would show that the Reformation “was an alteration greatly for the worse; that the Reformation, as it is called, was engendered in beastly lust, brought forth in hypocrisy and perfidy, and cherished and fed by plunder, devastation, and by rivers of innocent English and Irish blood.” It was the Reformation that brought misery to the poor, said Cobbett. “The moment” England lost the “protection of the Pope,” he wrote, “its kings and nobles became horrid tyrants and its people the most abject and most ill-treated of slaves.”

In The History of the Protestant Reformation in England, Cobbett described the lives of Great Britain’s poor. In Ireland, he wrote, they “are now eating seaweed,” while the poor are “detected in robbing the pig-troughs in Yorkshire.” In Lancashire and Cheshire, they “are eating horse-flesh and grains.” Not only were the poor badly fed and wretchedly paid, according to Cobbett, but they were dishonorably treated, “harnessed like horses and drawing gravel in Hampshire and Sussex.” Other accounts of the time support Cobbett’s charges, adding what he himself said elsewhere — that the poor rural laborers of England lived chiefly off cold potatoes and water. This made Cobbett especially angry, for he despised potatoes.

However, as long as the Tories controlled the cabinet, as they did under George IV, any reform of government seemed impossible. But hopes for reform sprang anew when George Canning became prime minister in April 1827. Though himself a Tory and no supporter of governmental reform, Canning had long favored Catholic emancipation. And as prime minister, Canning invited reform-minded Whigs to join his cabinet. But Canning died in August 1827, and the new prime minister, Lord Goderich, fell from power only five months later. The man who replaced Goderich was the most conservative of Tories and a determined opponent of Catholic emancipation. He was Arthur Wellesley, Lord Wellington — the hero of Waterloo.

Though he opposed Parliamentary reform, Wellington ended up surprising both the king and the Protestant party in Parliament by introducing into Parliament the Catholic Relief Act of 1829. This act granted Catholics the right to sit in Parliament and repealed the last anti-Catholic laws in Ireland. But the act increased the amount of money one had to have before he was given the right to vote. The effect of this was to disenfranchise the Catholic peasants of Ireland.

The Catholic Relief Act of 1829 passed Parliament on March 24, 1829, and was signed by the king on April 13. Though Wellington did not know it, this bill was the beginning of what he himself thought was a very great threat to the British Constitution — the reform of Parliament.

A German Composer Inspired by Britain

In 1829, the German composer, Felix Mendelssohn Bartholdy, made the first of what would prove to be his many visits to England, Scotland, and Ireland. This his first visit inspired a concert overture, the Hebrides Overture, Op. 26. The following is a performance of this piece by the London Philharomic Orchestra, conducted by Claudio Abbado.