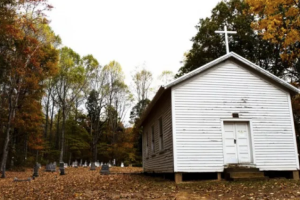 Nestled in the thick woods atop Irish Mountain in West Virginia, a small, whitewashed wooden church stood resolute for nearly a century and a half — until this morning.

Irish Mountain is aptly named — its bright green foliage would not be out of place on the Emerald Isle. But the name of the place goes deeper than appearances. St. Colman Chapel, which was discovered burned to the ground the morning of June 27, was the last surviving remnant of a once-thriving Irish immigrant community in the area, and its adjacent cemetery marks the final resting place of many of those Irish Catholics.

The chapel burned under suspicious circumstances the night of June 26-27 and is being investigated as arson, according to the local volunteer fire department.

The Diocese of Wheeling-Charleston told CNA it “is saddened to hear of the devastating fire at the historic St. Colman Catholic Church near Shady Spring, WV. Thankfully, no one was inside the building when the fire occurred and the structure is a total loss. The church, which was placed on the National Register of Historic Places since it was built in 1877 was not regularly used. The Diocese is truly grateful for the response of so many fire departments in the area, but the little church burned quickly and nothing can be saved. The cemetery behind the church will continue to be maintained.”

According to the nomination form for its inclusion on the National Register of Historic Places, St. Colman’s was founded around 1877 to serve the burgeoning Irish immigrant population. It gained the moniker of “The Little Catholic Church on Irish Mountain.”

The Irish were some of the earliest European settlers in West Virginia, arriving in the mid-19th century. On Irish Mountain, the populace had grown to more than a half-dozen families after the first Irishman to settle in the area, Maurice Sullivan, purchased a large tract of land in 1855.

But in the late 19th century, the verdant wilderness represented a foreboding obstacle.

“Located in an extremely isolated area, this community of Irish farmers became virtually self-sufficient and formed a distinctive ethnic group,” the nomination reads.

“The one aspect of their lives, however, in which they did not feel self-sufficient was their lack of a place of spiritual solace. The closest Roman Catholic church was St. Patrick Catholic Church in Hinton, founded in 1872, which was nearly fifteen miles away over torturous mountains and through rugged terrain.”

Historic church and Inspiration in its cemetery

The boxy, simple building was originally constructed of hewn logs, and many years later, in 1928, the log structure was covered with clapboard wood siding painted white. The church was dubbed St. Colman.

A large, unadorned wooden cross rose above the roof level at the chapel’s front. Inside, the white altar and some of the benches for the congregation were constructed in 1904 by Father J. J. Swint, who was a carpenter as well as priest, and later became Bishop of Wheeling.

Outside, the chapel’s cemetery contains the graves of several dozen of the area’s Irish residents, marked with granite and marble upright gravestones. It also has what is known as a “Lost Corner,” located in the cemetery’s rear, which is a small plot of unconsecrated ground where the unbaptized were buried. One gravestone bears the epitaph:

“Remember kind friends as you pass by. As you are now, so once was I. As I am now, so you must be. Prepare for death, and follow me.”

Despite the area losing some of its population as a result of some of its men leaving to work on the railroad, the community at Irish Mountain continued to thrive into the 20th century, with an average of 15 to 20 families occupying the area, the nomination says. But the mission church was never given its own priest, instead always relying on the Hinton parish, St. Patrick.

At the time the Historic Places register nomination was written — 1984 — the author of the form described the worshipers there as “occasional.“

“It’s just truly heartbreaking because there’s so much history there,” she said. The church was a place of meaning and purpose for the immigrant community, Harrison said, and it saddens her to see it destroyed.

The chapel had attracted attention in recent years for reasons other than its Catholic history — it was visited by ghosthunters, who claim to have experienced “cold spots” and the presence of ghosts at the site. In particular, the presence of the cemetery’s “Lost Corner” appears to have captured the imagination of believers in the paranormal.

Ghosts or not, the attention given to the chapel by ghosthunters has caused it demonstrable harm. In 2012, the “windows, pews and the altar were broken and destroyed” by vandals, according to a report from the Beckley Register-Herald. The assailants also reportedly spray painted a message on the chapel’s interior: “This s*** is not haunted.”

It is unclear whether the suspected arson attack that destroyed the church this week is related to its phantasmal reputation, or to the spate of arson attacks against Catholics that have plagued the nation as a whole in recent months.