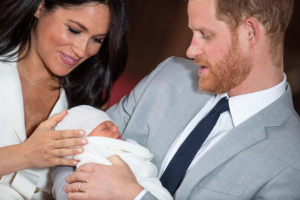 More Wondrous than the latest Royal Birth: What Prince George can do that no English monarch has done for 350 YEARS

Congratulations to Prince Harry and Meghan on the birth of their first child, now named Archie Harrison Mountbatten-Windsor, as congratulations are in order for any couple welcoming a child into the world!  What we found especially delightful amid our current deadly age of abortion “rights” and legalized infanticide is the utter joy of Prince Harry in announcing the birth, as captured in a video I’m sure you’ve probably seen and viewed in the Instagram video clip below.  (even bigger news continued below)

Even more wondrous, especially to the likes of Englishmen of not-so-long-ago such as St. Thomas More, St. John Fischer and fellow English martyrs, is that this new royal child will join Prince George and his siblings Princess Charlotte and Prince Louis as the first royal generation to be allowed to marry a Catholic since the reign of King James II almost 350 years ago!

Here’s a brief history of the various rules of succession leading up to today, as recounted in the U.K. publication Express:

Express—The 1701 Act of Settlement was passed to ensure the English and Irish crowns would only pass on to Protestants.

It meant that anyone who became a Roman Catholic, or who married one, would be disqualified from inheriting the throne.

This was originally brought into law after the reign of the unpopular Catholic monarch James II was brought to an end and English courtiers invited Protestant William of Orange and James’ daughter Mary to take the throne in what has since been called the Glorious Revolution of 1688.

James was exiled and his son, also called James, was barred from the line of succession which brought on the Jacobite revolts, with Bonnie Prince Charlie coming the closest to reclaiming the throne in 1745.

Neither Mary, or her successor Anne, produced any surviving heirs but the Act of Settlement was passed to keep the crown in Protestant hands.

After Anne’s death the House of Hanover was then invited to ascend the throne, with George I ruling from 1714 to 1727 and his heirs forming the Georgian age until the reign of Queen Victoria.

Because of this ancient law, Autumn Kelly, before she married Peter Phillips, Princess Anne’s son, renounced her Catholic faith in 2008.

Lord Nicholas Windsor, the youngest son of the Duke of Kent, was removed from the line of succession when he converted to Catholicism in 2001.

His child, Albert, was the first member of the Royal Family to be baptised a Catholic since 1688.

However, the Succession of the Crown Act came into force in 2013 and ended the generations-old disqualification to the …. read more>>