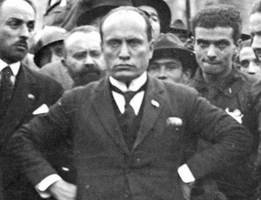 HISTORY: Mussolini and His Blackshirts March on Rome

“Either the government will be given to us, or we will seize it by marching on Rome!” declared Mussolini. And his Fascists responded with the cry, Roma! Roma! Roma!

The following text comes from the pre-eminent history textbook series for Catholic students, Volume:  “Light to the Nations II: The Making of the Modern World.”

The end of the Great War proved a disappointment to Italian nationalists. Though Italy had gained those parts of “unredeemed Italy” she had demanded in the Treaty of London, the nationalists had wanted even more lands.

The nationalists had hoped the war would make Italy a great power in the eastern Mediterranean, but instead, the war’s end brought only hardship. The cost of food, rent, and other necessities of life had risen greatly. Many soldiers returning from the war were without jobs.

But the Italian Socialists were not content with winning elections.

Both Bolsheviks (with encouragement and aid from Moscow) and anarchists began urging revolution. The Bolsheviks called for a general strike and urged workers to establish a “dictatorship of the proletariat.” And, even before the August 1919 elections, the countryside responded.

In the midst of this crisis, Benito Mussolini called all those who were discontent in Italy to meet with him in Milan.

In March 1919, a group of about 200 republicans, socialists, revolutionaries, and discontented soldiers came together in Milan and, with Mussolini, formed the Fasci di Combattimento (“bands of fighters”).

The ancient Roman fasces (a bundle of rods, tied together to a bronze axe head) was their symbol and the inspiration for their name—the Fascists.

Though they had no clear ideals, the Fascists were extremely nationalistic; they were also anti-socialist and violent. They were committed to use armed force, if necessary, to achieve their goals.

Despite their devotion to action, Mussolini and the Fascists did nothing to oppose the uprisings in Italy. Instead, Mussolini ran for a seat in the Chamber of Deputies. He lost the election.

Even in August and September 1920, when about 500,000 Italian factory workers, roused by Bolsheviks and anarchists, went on strike, Mussolini said nothing.

It was only when the strikes collapsed in the Fall that the Fascists began their active campaign against the socialists.

Backed by wealthy businessmen and local landowners, squads of Fascists, wearing black shirts and armed with clubs, guns and castor oil began attacking socialists and other radicals in the autumn of 1920.

The violence continued into 1921, with little or no opposition from the government.

By late 1921, Mussolini and his Fascists had gained control over most of Italy.

Mussolini’s great moment came in the summer of 1922, when socialists and trade union members called for another general strike.

Mussolini, now a member of the Chamber of Deputies, declared that if the government did not stop the strikes, he and his Blackshirts would do so.

When the government did not act, Fascists seized control of the government in many of Italy’s provinces outside of the large cities. On October 24, 1922, at a gathering of about 40,000 Fascists in Naples, Mussolini called on Italy’s prime minister to dissolve the Chamber of Deputies and place five Fascists in his ministry.

“Either the government will be given to us, or we will seize it by marching on Rome!” declared Mussolini. And his Fascists responded with the cry, Roma! Roma! Roma!

Three days later, Mussolini and thousands of Blackshirts began their march on Rome. Though the government urged King Vittorio Emanuele to declare Rome under siege, the King refused. Fearing a civil war, the king had decided to give in to Mussolini’s demands. He dissolved the ministry and invited Mussolini to form a new one.

By the end of October, 1922, Mussolini, in the name of the King, had become the Prime minister of Italy.

Newsreel of the historic take-over of power in Rome

reprinted with permission, Catholic Textbook Project, with history textbooks now in use in Catholic schools in more than 100 dioceses.  The perfect gift for children and grandchildren who may not be learning the history YOU learned as a child!