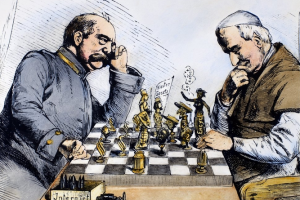 It was perhaps the final insult for German statesman Otto Eduard Leopold, Prince of Bismarck and Duke of Lauenburg—who was known as Otto von Bismarck (view image to right, below).

Ultimately this statesman is credited with masterminded the unification of Germany in 1871. He served as its

first chancellor until 1890, in which capacity he dominated European affairs for two decades. But in the slice of history recounted below, Otto von Bismark had no knowledge of what the future would hold, nor did Catholics.

An envoy to Rome

In May 1872, Bismark had chosen Cardinal Gustav Hohenlohe as the German envoy to the pope in Rome. Although a cardinal, Hohenlohe was bound to be disagreeable to Pope Pius IX.

In addition, the princely Hohenlohe family, including the cardinal himself, had objected to the pope’s Syllabus of Errors and were well known opponents of the doctrine of papal infallibility.

It should not have been surprising then that Pope Pius refused to receive so objectionable a churchman into his presence. But the rejection deeply offended Otto von Bismarck.

In response to the pope’s “insult,” Bismarck introduced a bill into the Reichstag to banish the Jesuits from Germany.

Bismarck, the Hohenlohes, and the Old Catholics in general thought the Jesuits were the cause of all the anti-Liberal ideas in the Church. They were certain that the Jesuits had been behind the Syllabus and the definition of papal infallibility.

The Jesuits were a menace to Germany, they said. Thus, with the backing of the National Liberals, the Reichstag on July 4, 1872, passed a law forcing the Jesuits to leave Germany. The law, the delegates said, saved the German bishops from Jesuit influence.

Political war against the Church

This was only the beginning of Bismarck’s assault on the Church. Bismark decided, however, to carry out the struggle not in the imperial legislature, but in the parliament of the state of Prussia—the Landtag (a legislative assembly among German-speaking individual states).

At the time, Bismarck was imperial chancellor as well as chancellor of the kingdom of Prussia. 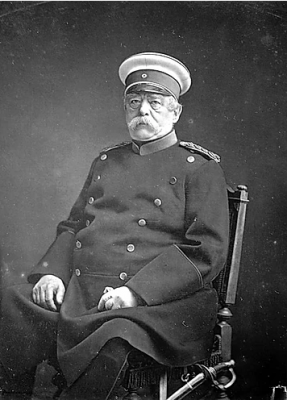 Moreover, although the anti-Catholic laws passed in the Landtag would affect only the state of Prussia, this state covered most of northern Germany, from the borders of Russia to the Rhine River and beyond. And what was done in Prussia would be copied by other states of the empire.

In the autumn of 1872, Prussia’s “minister of worship,” Adalbert Falk, began introducing anti-Catholic bills into the Prussian Landtag. These bills called for a number of things, including:

During the debates in the Landtag, one Liberal member rose and declared that the bills were part of what he called a Kulturkampf (“war for civilization”); Germany was fighting for her life and culture against the Catholic threat, he said.

Other deputies pointed out that the laws violated the Prussian constitution, which guaranteed the Catholic Church the right to be free from government interference. This problem was easily taken care of; the Landtag, with the help of Wilhelm I, simply changed the constitution.

In May 1873, the Landtag voted the anti-Catholic bills into law—for which reason they were called the May Laws.

From Rome, Pope Pius IX condemned the May Laws, as did the Prussian Catholic bishops. In a May 2 pastoral letter, the Prussian bishops called on all Catholics to engage in peaceful resistance to the laws; and on May 26, the bishops announced to Otto von Bismarck that they would not cooperate with the government in its attempts to carry out the May Laws.

As illustrated in the anti-Catholic newspaper cartoon above, Bismarck and the pope are shown playing a game of chess, in which Bismarck is about to win. The pope holds a chess piece with the name “Encyclical” referring to the pope’s formal condemnation of anti-Catholic laws waged against the Church.

The battle for religious freedom was on

The May Laws of 1873 were not the last anti-Catholic measures enacted by the Prussian government.

In May 1874, the Landtag declared that any priest who refused to obey the May Laws would be turned over to the police.

In April 1875, it ruled that state payments to Catholic sees (episcopal jurisdictions, dioceses) would be discontinued.

On May 31, 1875, the Prussian government ordered the closing of all monasteries and banished all religious (except those who worked with the sick) from Prussian territory.

On June 20, the Landtag confiscated all Church property and gave it to laymen to administer.

Finally the government either drove the bishops from Prussia or imprisoned them.

By 1877, every Prussian bishop, along with hundreds of priests, was either in exile or prison. Tens of thousands of Catholics were left without the sacraments and the ministry of the Church.

Bismarck might have hoped the May Laws would frighten lay Catholics into going along with the government, but they too resisted the laws.

Instead of receiving the sacraments from government-approved priests, lay Catholics attended clandestine Masses offered by priests known to be secret representatives of the exiled bishops.

Even a Prussian law removing marriage from the jurisdiction of the Church did not weaken the devotion of Catholics to the Church. The more the government struck out against their religion, the more Catholics resisted.

One sign of this resistance was the phenomenal growth of the Center Party.

Prussia had not been the only German state to carry out a Kulturkampf, and Catholics in every state rose in opposition to government persecution.

Before 1873, the Center Party had held 63 seats in the Reichstag; but in the November 1873 election, the number of Center Party representatives grew to 91.

Even in the Prussian Landtag, the number of Center Party delegates rose from 50 to 90. The party was growing swiftly throughout Germany, while the number of Catholic newspapers reached 120.

Bismarck had hoped to destroy the Center Party by his persecution; if anything, he was making it a major political party both in Germany and in Prussia.

In their struggle against the Kulturkampf, Catholics and the Center Party won unusual allies. One of these was the Old Conservative Party, made up of old-time Prussian Junkers, Lutheran clergymen, and army officers.

Although these individuals had supported Bismarck’s military policy, they were not fond of his ideas of a united German nation. They were, moreover, serious Christians who did not like anti-religious laws, even if they were directed against Catholics. They thus joined forces with the Center Party to combat the May Laws in the Prussian Landtag.

The above exerpt, with slight editing by Catholic Business Journal for readability and clarity as posted here, was taken with permission from the textbook Light to the Nations II: The Making of the Modern World, one of a remarkable series of history textbooks for Catholic schools produced by Catholic Text

book Project — currently in use in schools in more than 100 dioceses and in English-speaking pockets around the world.