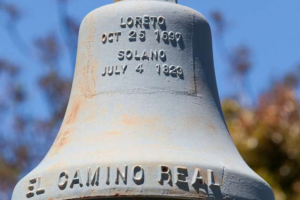 CNA—A university in California removed a bell last week after a Native American group claimed the historic piece was disrespectful to their heritage.

Catholic Business Journal wonders what this or that group’s “offense” and “disrespect” have to do with objective historic fact and feat at all. History is, well, just that, history — an objective recounting of what took place before we came along.

Nonetheless, the El Camino Real Bell, named for the California route connecting the 21 Franciscan missions, was removed by the University of California, Santa Cruz (UCSC) on Friday. The bell has been on UCSC’s campus since the 1990s. It is one of a series of bells placed along the route.

The Amah Mutsun Tribal Band issued an objection to the bell during the last school year. The group said the bell symbolized the enslavement and humiliation of their ancestors.

“It is shameful that these places where our ancestors were enslaved, whipped, raped, tortured and exposed to fatal diseases have been whitewashed and converted into tourist attractions,” said Valentine Lopez, chair of the Amah Mutsun Tribal Band, according to Fox News.

Catholic Business Journal notes that just because the Amah Mutsun Tribal Band happens to think the missionary bell symbolized something, does not mean it is true! Hello! The editor of this journal has been in docent training for one of the missions in the past and has read the writings of Saint Junipero Serra and other of the founding missionaries and the truth is that the most if not all the Franciscan missionaries treated the native Indians fairly and with respect, including those native indians who were considered by their tribe to be outcast or left to die alone..

Sarah Latham, the university’s vice chancellor of administrative services, said the move was “in support of efforts to be more inclusive,” the Associated Press reported.

A decision regarding the bell’s transfer or destruction has not been announced yet. Amah Mutsun suggested it should either be placed in a museum or melted down.

The bell is one of the hundreds of others placed around California in 1906. According to the Fox News, a press release from UCSC claimed that these bells has been meant to honor California’s “Hispanic past” and “expand tourism.”

“The bell marker, which memorializes the California Missions and an imagined route of travel that once connected them, is viewed by the Amah Mutsun and many other California indigenous people as a racist symbol that glorifies the domination and dehumanization of their ancestors,” the release continued.

The removal of the bell follows other outcries against historical monuments in recent years. California legislators attempted in 2015 to replace a statue of St. Junipero Serra with Sally Ride, the first American woman in space, at the National Statuary Hall in Washington D.C.

Critics argued that the statue was degrading to Native Americans and used visual stereotypes that were racist.

Serra played a key role in the evangelization of 18th-century California. The missions he founded took in thousands of Native American converts to Christianity and taught them technological development skills.

Serra and other missionaries have drawn criticism from those who see them as a symbol of European colonialism and characterize the missions as engaged in the forced labor of Native Americans.

However, many other historic scholars and others vigorously dispute these claims, noting that participation in mission life, while strict, was voluntary, as well as the efforts by the missionaries to feed, clothe, and house those who came to them.

Catholic Business Journal adds that in many ways the missionary locations were like the first hotels — the missionaries welcomed anyone, offering food, clothes, a place for weary travelers of all kids to sleep, catch up on news before moving on.

Pope Francis canonized Serra in 2015. He praised the saint for seeking “to defend the dignity of the native community, to protect it from those who had mistreated and abused it.”

Serra, the pope said, “was excited about blazing trails, going forth to meet many people, learning and valuing their particular customs and ways of life. He learned how to bring to birth and nurture God’s life in the faces of everyone he met; he made them his brothers and sisters.”

Catholic Business Journal adds that if you think your children and grandchildren are learning the same things in today’s history — oops, “social studies” –class they you learned as a child, it ain’t so!