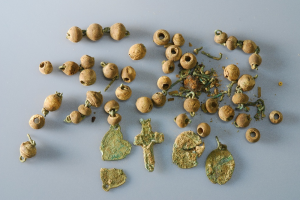 CNS/Catholic Sentinel—Oregon’s rich Catholic history begins a few miles north in what was then Oregon Country and now is Washington state.

Archaeological digs at Fort Vancouver, Washington, have uncovered a trove of Catholic artifacts from the earliest days of the church in the Pacific Northwest, including a crucifix, rosary beads and a Miraculous Medal, all from the 1840s.

“Most items found underground that are part of the archaeological record are things that were discarded, for example, broken dishes or leftover bones from a meal,” she told the Catholic Sentinel, newspaper of the Archdiocese of Portland. “But these religious items were precious to their owners and are more likely to have been carefully kept and lost accidentally, making them rarer finds.”

All the same, the finds didn’t surprise Huff. “Religion has been such an important part of people’s lives,” she said.

Fort Vancouver also boasts other precious Catholic artifacts, including a papal bull, a crucifix and reliquary from Pope Gregory XVI. These were gifts to Dr. John McLoughlin, the Catholic man named “Father of Oregon” by the Oregon State Legislature in 1957. 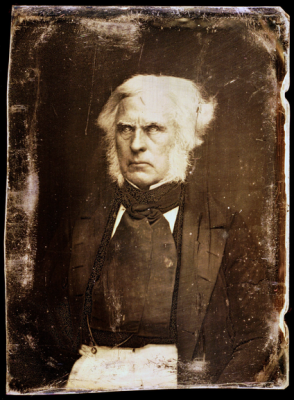 The Centenary,” the 100th anniversary history of the Portland Archdiocese published by the Catholic Sentinel in 1939, McLoughlin (photo to left

), was described as “one of nature’s noblemen in every sphere of life” and “of commanding presence, strict integrity, sound judgment, and correct principles of justice.”

The Sentinel declared that no man was better qualified” to be named — in 1824 –governor of Hudson Bay’s Northwest posts.

McLoughlin, born in Quebec and baptized Catholic but raised Protestant, returned to the Catholic Church in his later years. He built Fort Vancouver and opened it in 1825.

The 6-foot-4-inch McLoughlin, a physician, was a towering figure in Oregon’s history, helping American settlers in myriad ways, much to the consternation of his British bosses.

The Hudson’s Bay Company disapproved of the generous assistance McLoughlin provided American pioneers and missionaries arriving in the Oregon Country. They came without provisions, and he loaned them seed stock and even cattle — the reason he was declared “the Father of the Oregon.”

McLoughlin, writing to explain his actions, said that the Bible commands us to help the newcomer and those in need — but that in any case, the thousands of arrivals could easily overcome the fort with its 60 defenders should the newcomers become desperate.

The Pacific Northwest: A base for education and for Catholic missionaries!

Like almost every arrival to the Oregon Country, Father Francis Blanchet and Father Modeste Demers, who would become the first bishop of Vancouver Island, came to Fort Vancouver. So it was there that the first Mass in the Pacific Northwest was celebrated in 1838.

Father Blanchet would become the first archbishop of what today is the Archdiocese of Portland.

Even though Fort Vancouver was the headquarters of the British Hudson’s Bay Company’s Columbia Department, and therefore more likely to be Protestant than Catholic, many of the fort’s employees were Catholic, as were their wives, who were often Native American women or were part Native American.

Douglas Deur, an associate research professor at Portland State University, has written a history of Fort Vancouver as a base for missionary efforts. In his essay, Catholics come out looking pretty good, at least compared to others of the era. That is largely due to McLoughlin’s influence.

Under McLoughlin, Native American and European American children were educated together. He had little tolerance for bigotry and especially welcomed the Catholic priests, who were notably less intolerant than their counterparts.

Deur wrote that Fathers Blanchet and Demers “exhibited a degree of compassion and compatibility with the unique circumstances of the fur trading post.”

Their attitudes contrasted with the first official missionary that Hudson’s Bay had sent out two years earlier.

The Rev. Herbert Beaver, an Anglican priest, was “unabashedly bigoted and deeply contemptuous of the sizable portion of his congregation that were Indian or of Indian ancestry,” wrote Deur.

Beaver was especially offended by the company employees who were married, usually in common-law marriages, to women who weren’t of pure European descent. That would include John McLoughlin, whose common-law wife was half Ojibwe or Cree. Beaver also was anti-Catholic.

By 1846, McLoughlin was fed up with the Hudson’s Bay Company and the organization felt the same way about him. McLoughlin resigned — or was fired — and moved to Oregon City, which he had named and where he had a large land claim.

Oregon City is central not only to the Catholic Church’s history in Oregon but also to the state itself. It was the first incorporated city west of the Rocky Mountains and was Oregon’s provisional and territorial capital.

It was McLoughlin who donated the land in Oregon City upon which St. John the Apostle Cathedral was built, the archdiocese’s first cathedral.

(story continues below image and caption) 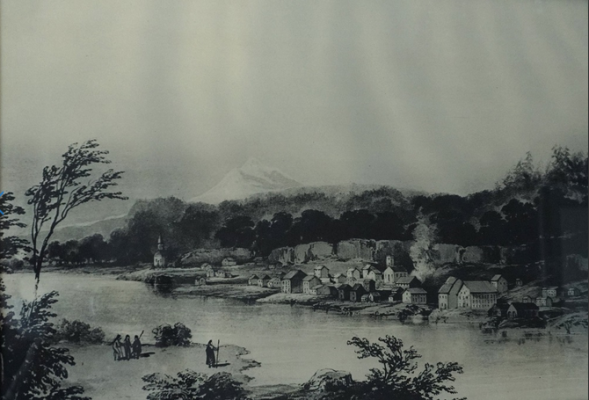 An early illustration of Oregon City, Ore., hanging in the McLoughlin House shows St. John the Apostle Cathedral on the north side of the pioneer community. The house is is a unit of the National Parks Service’s Fort Vancouver National Historic Site. (CNS photo/Kristen Hannum, Catholic Sentinel)

“The McLoughlins were very involved in building up Catholicism in Oregon,” said Huff.

McLoughlin had been urging French-Canadian Catholic families to settle in Oregon City and on the French Prairie for decades. He also encouraged the Oregon Catholics to petition Canadian bishops for priests to be sent to Oregon — the reason why Fathers Blanchet and Demers came.

“Dr. McLoughlin was trying to make sure his Catholic employees had services they could attend,” said Huff.

The people of Oregon City, in particular the Methodist missionary Jason Lee and Oregon’s first governor, George Abernethy, repaid McLoughlin poorly for all the support he had given the burgeoning community.

In 1857, they sent dishonest testimony east to the Supreme Court in the case over attacks o 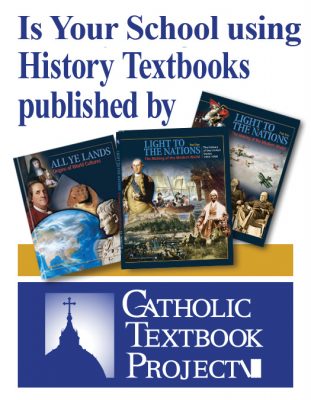 n McLoughlin’s land claim. No one in Washington was focused on Oregon at the time — the drumbeats presaging the Civil War were beating too loudly.

McLoughlin, who had purchased the entire claim to Oregon City, was stripped of it. He died that same year, in 1857, a bitter and decrepit old man.

He was not, however, in any way destitute, having had interests in many businesses. His son David would eventually redeem most of the land claim — and John McLoughlin’s good works are felt in what became a thriving church in Oregon.

Kristen Hannum is on the staff of the Catholic Sentinel, newspaper of the Archdiocese of Portland.