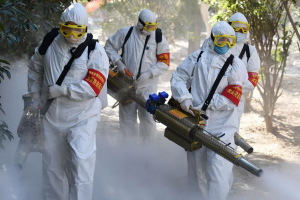 In this breaking news story—revealing what took place in February of this year—we anticipate gleaning new facts about COVID-19, the Wuhan lab and China’s bioweapons programs, not from just anybody, but from a Chinese Insider — a Top communist Chinese intel officer—who defected to the U.S.

The truth ultimately wins out … every time.  Even with severe media suppression and worse!

We’re sure this is just the beginning of the true story behind worldwide draconian government shutdown, economic loss, needless suffering, controlled medical solutions and deaths isolated from family and loved ones.

The Blaze reports as follows—There are multiple reports that a top Chinese official, who is reportedly “close to” Chinese President Xi Jinping, has defected to the United States. The reports claim that the defector is cooperating with a U.S. intelligence agency, providing eye-opening intel about the Wuhan Institute of Virology and China’s bioweapons programs.

There are reports that Dong Jingwei defected from China with his daughter Dong Yang in mid-February, flying from Hong Kong to the United States. Dong landed in California, where he contacted the U.S. Defense Intelligence Agency to inform officials that he was defecting and could provide inside information about covert Chinese operations, according to a report from Red State, which says, “Dong then ‘hid in plain sight’ for about two weeks before disappearing into DIA custody.”

Dong is a longtime official in China’s Ministry of State Security, also known as the “Guoanbu.”

The U.S. Department of Justice describes the Ministry of State Security as an “institution similar to the FBI and the Central Intelligence Agency (ClA) combined under one intelligence directorate responsible for counter-intelligence, foreign intelligence, and political security.”

Dong’s “publicly available background indicates that he was responsible for the Ministry’s counterintelligence efforts in China, i.e., spy-catching, since being promoted to vice minister in April 2018,” as reported by… read>>

Dong allegedly supplied the U.S. with “information about the Wuhan Institute of Virology that changed the stance of the Biden administration concerning the origins of the COVID-19 pandemic.”

Red State reports, “Not only does Dong have detailed information about China’s special weapons systems, the Chinese military’s operation of the Wuhan Institute of Virology and the origins of SARS-CoV-2, and the Chinese government’s assets and sources within the United States; Dong has extremely embarrassing and damaging information about our intelligence community and government officials in the ‘terabytes of data’ he’s provided to the DIA.”

The Red State report also claims that Dong provided the DIA with information about: “Early pathogenic studies of the virus we now know as SARS-CoV-2, models of predicted COVID-19 spread and damage to the US and the world, financial records detailing which… read>>