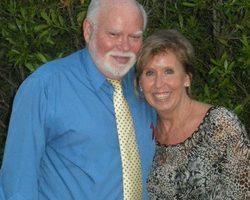 It all began with my  growing concern for Skip’s health (see photo, left). He comes from a family of heart disease, diabetes, high blood pressure and high cholesterol, and he was dealing with EVERY one of those health issues. Five years ago, Skip was recovering from a quadruple bypass. He had numerous complications that put him back in the hospital repeatedly… and was in and out of a total of four different hospitals! The doctors said there was nothing more they could do for him and sent him home. Skip sat hopelessly in a lazy-boy recliner from morning till night, totally lifeless and depressed. He required a walker or cane when attempting to walk. He felt as though his life was over at the age of 63.

By February of the following year, nothing had changed. He was growing weaker with every passing day. I was losing hope that he would ever recover when a friend from Chicago told me about this

nutritional product. She had used the these products for her family and saw tremendous improvements with numerous and varied health problems.

That sounded good to us. The product had a money-back guarantee so Skip and I decided that we had nothing to lose! We began taking the products.

I immediately felt improved energy and sinus relief. I’d had chronic sinus problems for 30 years and after a week on the product, I noticed that I had regained my the sense of smell I had lost. Another problem I had been dealing with was shooting pains in my thyroid gland. I was planning to schedule an appointment with my doctor, but after a week of taking the nutrition shakes the shooting pains were gone and have not returned since. Also, I have always dealt with frequent fever blisters, yet I have not had another one since I began the products. And best of all, my brain fog lifted—that was really wonderful!

Skip didn’t see the immediate results that I did. He only took the shakes out of love for me, balking every time he drank a shake. He complained that this “powder in a can” couldn’t possibly make a difference in restoring him to good health. Then his energy and stamina began to improve. Within two months, his blood pressure was so greatly improved that he had to cut back on blood pressure meds. Thanks be to God!

After only four months of this nutrition, he actually returned to work. Imagine his excitement after 1 ½ years of being home bound with severe health issues. Even more exciting for me… I had my husband back!

The biggest surprise came shortly thereafter when an angiogram at University of Pittsburgh Medical Center showed that he didn’t require another scheduled stent to be inserted in his completely blocked vertebral artery. He had formed a healthy new collateral artery that was now feeding the brain. The renowned surgeon who performed the procedure had never seen anything like this before! We were so grateful for the many blessings of restored good health!

There’s more to this story… Listen to a very short audio or read more:  http://www.hopeinacan.com/skip–fanny-lefever.html