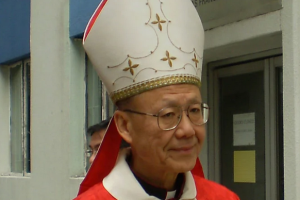 Less than 2 months ago, June 19, 2019, this article was posted in the South China Post—Hong Kong: Hong Kong chief executive Carrie Lam faced the public on Tuesday evening and apologized just days after two million people marched against her extradition bill, many of them calling for her resignation. But on Monday, Lam took counsel from six religious leaders.

The heavy hand of communist Beijing is being watched in Hong Kong, as speculation rises over whether Lam will step down as leader. But another strong factor in Hong Kong’s politics –from the office of the chief executive to the streets and the people power movement – is Christianity.

Lam refused to become a Communist Party member because it would require her to renounce her Catholic faith.

Yet while she met with Catholic Cardinal John Tong on Monday evening, Bishop Joseph Ha stayed outside her office, praying with young protesters who were demanding she step down.

“No matter how long they stay, I will continue to stay with them,” said reverend Ha, 60. (to the right, photo of Bishop Joseph Ha. Credit:Catholic.org.hk)

Yat-ming Fung, director of the Hong Kong Catholic Social Affairs office, said protesters were in contact with priests, and when things became too agitated, they called the bishops down to the protest zone to soothe the situation.

“We are trying to keep the young ones calm,” said Fung, who is from Melbourne. “There is no way things should become violent.”

He says Lam is a member of Wanchai parish, but the Catholic church doesn’t promote any political candidates. Instead it calls for justice – which means universal suffrage.

On Wednesday, Cardinal Tong and the head of the Hong Kong Christian Church Reverend Eric So, issued a strong joint statement saying the churches accepted Lam’s personal and public apology “with the admission of her own inadequacies”.

But they called for Lam to go further, and “make an explicit, public statement that the bill has been ‘withdrawn’, to meet the strong demand of the general public”. They said the churches also wanted an independent investigation into clashes between police and protesters on June 12.

The Catholic church opposes the extradition law because it would imperil missionaries in China, where a crackdown on religious groups has worsened under president Xi Jinping.

“What if a particular individual is accused of illegal trading – selling the bible?” says Fung, who marched on Sunday.

He also sang. “Sing Hallelujah to the Lord” has become the movement’s anthem.

On the night before police fired teargas to disperse protesters on June 12, a church group started… Read More>>