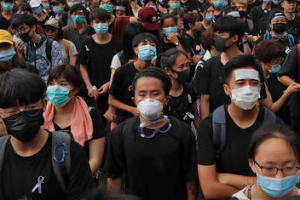 Catholics march for peace in Hong Kong as unrest continues

Large protests started in response to a proposed extradition bill, which has now been suspended, but have evolved into a more demanding pro-democracy movement.

Meanwhile, over 1,000 Catholics have marched for peace in the city as mass unrest in Hong Kong is now in its tenth week.

People at the vigil gathered in front of the Cathedral of the Immaculate Conception and marched through the central business district to the Court of Final Appeal of the Hong Kong, singing hymns and holding electric candles.

Organizers of the march who include the… Read More>>