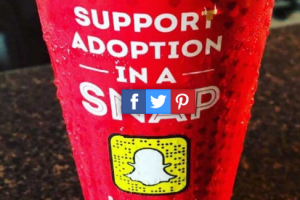 Wendy’s and its partner, the Dave Thomas Foundation for Adoption, are pushing for the adoption of children who for some reason find themselves stuck in the foster care system for years with little prospect of being taken in on a permanent basis.

According to AdoptUSKids, just 25% of children fostered in the United States will be adopted by their foster parents. That’s where “Wendy’s Wonderful Kids” steps in, offering to assist in finding permanent homes for those children who are viewed by some as less desirable to adopt — notably, those who are older, have special needs, or who are part of a sibling group

Wendy’s Wonderful Kids program uses full-time, one-on-one caseworkers, each of whom are expertly qualified and know the children with whom they working with extremely well. This approach means that case workers are able seek out the right family situation for the youngsters.

“At the core is knowing that child,” said Wendy’s CEO Rita Soronen in an interview with Columbus Monthly, noting that one of the key aspects to the success of the program is giving caseworkers time and space to work.
“When you give a caseworker time to really work a case, you will find an adoptive family for these children,” she added.

How can you get involved?

Wendy’s has made it incredibly simple to get involved with the programm through an innovative partnership with social networking app, Snapchat.

“The Foundation is now seeking to go nationwide, and has partnered with Snapchat through the Cause Cup program. Starting in May, the Cause Cups at participating Wendy’s will have a Snapcode that, when scanned, will donate $5 to the Dave Thomas Foundation for Adoption — for a total of up to $500,000. The donations will help bring the program to all 50 states and DC by 2028.”

What’s the background to Wendy’s passion for adoption?

An adoptee himself, the late Wendy’s founder, Dave Thomas, always had a vested interest in the cause of adoption. In 1990, he was invited to the White House to become a spokesman for the national adoption awareness campaign.

Then, in 1992, he founded the Dave Thomas Foundation for Adoption, which has a very simple mission stated on its website: to “dramatically increase the number of adoptions of children waiting in North America’s foster care systems.”

Yet attention-grabbing accusations from the abortion crowd over the sweeping pro-life gains that are being made across the United States accuse those advocating for the life of the unborn as having apathy toward caring for children once they are born. Not true, of course.

What have you personally done? Response overwhelming!

“What have you personally done?” is a question that is often asked of pro-lifers by abortion advocates who believe the false narrative that those who campaign for the unborn do nothing else to care for both vulnerable mothers and needy children.

But as we know well, nothing could be further from the truth, as evidenced in the article below:

Adoption continues to be the most powerful answer to abortion. The reality that pro-lifers—including corporate leaders—not only advocate for the rights of the unborn, but also offer to help facilitate adoption and care for the unborn is a profound, impactful and Christ-like commitment that, according to Catholic Business Journal writers and others, showcases our daily call as faith-driven business leaders to stick to our faith and ethical principles and to always lead by example.