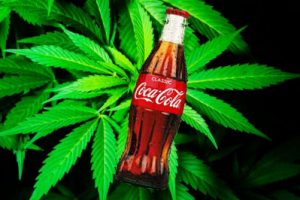 Cannabis in Your Coca-Cola … or Beer?

Soft drink giants such as Coca-Cola and even beer manufacturers are considering new beverages infused with cannabis, without the psychoactive properties of pot. I wonder if such beverages would be available in all U.S. states or only in those that have legalized marijuana?

According to BNN Bloomberg, “Coke officials are keeping an eye on the growing trend of drinks infused with cannabidiol, or CBD, the chemical in marijuana that can treat pain but not get users high.”

Officials at Canada-based Aurora Cannabis Inc., a Canadian licensed cannabis producer, who are reported to be in early stage talks with Coca-Cola, told CNBC that “Aurora has expressed specific interest in the infused beverage space, and we intend to enter that market. There is so much happening in this area right now and we think it has incredible potential. As a rule, we do not discuss business development initiatives until they are finalized, however we have a responsibility to our shareholders to give proper consideration to all relevant opportunities that are presented.”

Coca-Cola’s statement to the media reads as follows: “Along with many others in the beverage industry, we are closely watching the growth of non-psychoactive CBD as an ingredient in functional wellness beverages around the world. The space is evolving quickly. No decisions have been made at this time.”

Hmmm. So now high-sugar, caffeinated soda may actually be good for you—perhaps both causing AND knocking out inflammation, aches and pains at the same time?

Imagine growing up a teen five years from now, wading through the Madison Avenue ads for marijuana outlets and brands as commonly as a local liquor store. Not to mention learning, understanding and distinguishing the difference between cannabis, marijuana, hemp, and their various applications and effects.  The need has never been greater for instilling a genuine anchor, a True North, in our future leaders, leading by our own daily example and inspiring great faith and leadership development from an early age.