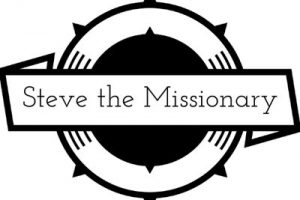 Steve Lewis isn’t a big name. Not even on your radar. He is a missionary.  But you won’t find him on the streets of an inner city or Third World country.  He’s not even a monk!  Yet he’s doing great missionary work in most unlikely of places: YouTube.

Ultimately, he’s building a faith-engaged-and-curious Catholic community the millennial way, by engaging often otherwise disengaged peers. His is a comfort zone where you can anonymously “hang out” if you want, view video clips, comment and ask or reply-to questions.

Non-threatening.  Accessible. Helpful when trying to find your way in the world of faith and meaning and genuine happiness.

Steve spoke at our local [email protected] breakfast yesterday morning and I met with him afterwards for a cuppa java before he drove back home to southern California where he is currently based.

But it wasn’t until later last night, after watching some of his video clips, that I understood why his work is important.  That’s when the penny dropped, so to speak.

In his presentation, Steve talked about his background—a graduate of LMU (Loyola Marymount University) who served as a FOCUS missionary on college campuses for three years, and who then transitioned into youth ministry work for the Diocese of Oakland.  He’d considered a priestly vocation at some point, but further discernment pointed him, at least for the present, in a decidely different direction.  A missionary of YouTube if you will.

Also known as Generation Y (who came up with these generational names I wonder?), or the Net Generation, they comprise the demographic cohort that directly follows Generation X. The term Millennials is usually considered to apply to individuals who reached adulthood around the turn of the 21st century. Their birth years are 1981-1996 (22-37 years old).

In his presentation, Steve painted a broad-stroked picture of millennials:

Why is Steve the Missionary important?

An objective observer from another planet might observe that there’s an “I” and “we” focus to many conversations and discussions with millennials.  For those of other generations, this might seem “off” or “jarring” because it can enter into the conversation in unexpected places and ways.

But after watching some of Steve’s videos and recalling elements of his morning presentation it dawned on me that the approach Steve takes—and those of many of his generation—is one of peer-to-peer, experiential, first-hand conversation or “verification.”

You won’t find preachy.  You will find engaging, even humorous or goofy.

What others —for example, that objective observer from another planet—might perceive as kinda crazy, not formal or typical engagement for such a weighty topic as faith, a millennial might say, “I trust that guy ‘cuz he’s real. He’s the real thing. He’s speaking my language” and therefore engage fully.

That said, what Steve Lewis is doing seems to me to be extremely important in evangelizing by, as St. Ignatius advised, meeting people where they are—at their door—and walking together through Christ’s door.

The “how it’s working” part

Steve launched his YouTube channel while working full time at the Diocese of Oakland.  It was a side gig, born of his own millennial habits.  While watching a bunch of YouTube videos he started wondering what kind of Catholic evangelizing videos or channels he could find on YouTube.

He searched online as only a millennial can. Intense and Obsessively. Results: None

But the missionary charism that attracted him to serve as a FOCUS missionary on college campuses, the same charism that led him to youth ministry, was still in his veins. He soon realized he needed to quit full-time steady work in order to give this new mission effort his full attention.  He moved back home and has committed one year to fully developing a self-sustaining evangelization ministry on YouTube and branching out from there.

Essentially, he saw a need and filled it.

It is mostly a labor of love, conviction and passion right now. (Though Steve would be grateful for any consistent help through his Patreon site: https://www.patreon.com/SteveTM )

Already he has begun to form a strong community and is reaching out to win-win sharing opportunities with like-missioned content creators in other venues.  Recently he and a colleague, Tommy Tighe (The Catholic Hipster), pitched a show to CatholicTV that was accepted.

It was a risk for CatholicTV.com to take on, but the show—Repent and Submit—has proved popular. It is now the Number 3 show on CatholicTV, preceded only by Holy Mass and a prayer show.

Steve says he’s not sure he wants the show to be more popular than the Mass, after all the Holy Eucharist is, as St. Thomas Aquinas proclaimed, the source and summit of Christian life!

The bottom line:  YouTube is missionary territory and millennials are there, on YouTube, waiting to be fed.  Finding Steve the Missionary’s channel offers a safe place to grow, get your feet wet and engage in faith, to ask any question you want, to transform your life for Christ and to ultimately engage in the fullness of local parish and your own interior life, millennial style.