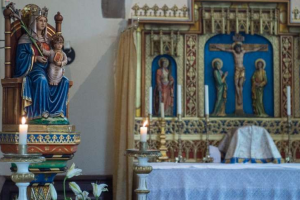 Despite the pandemic, Catholic shrine enjoys ‘biggest pilgrimage season’ in its history

CNA staff—When the coronavirus pandemic gripped England in March, the Catholic National Shrine of Our Lady in Walsingham was forced to close and cancel pilgrimages.

But rather than seeing this as a disaster, shrine rector Msgr. John Armitage regarded it as an opportunity. England’s national Marian shrine had already built up a following with its livestream Masses. Armitage decided that it would now livestream 24 hours a day, with the help of a sturdy internet connection provided by EWTN.

He devised a program that begins with morning prayer, followed by Mass, Exposition of the Blessed Sacrament, a talk on faith, the rosary, the Angelus and another Mass. And that’s just the morning.

In the afternoon, there’s the Divine Mercy chaplet, the rosary, more Exposition, Benediction, the Angelus and Vespers, followed by all-night adoration.

Impact felt around the world

“We’ve probably had the biggest pilgrimage season so far in the history of Walsingham because we’ve had thousands upon thousands of people every day joining us for our program,” Armitage told CNA.

Saying that he now felt like “the abbot of a monastery rather than the rector of a shrine,” Armitage explained that people from 135 countries had taken part in the program and that he had been inundated with letters of gratitude.

“Last week I had a lovely letter from a family of farmers in Wisconsin, just saying how much they appreciated it. They watched as a family,” he noted. “So it’s made that connection.”

What kind of impact is the shrine having?

“There are those who have been in lockdown, like the rest of the world. They’re grateful that it’s given them a spiritual framework during this time.”

“But much, much more important, it’s given a spiritual framework for those who’ve been in lockdown for years. The elderly, the disabled, those who are never going to come out again.”

“And I don’t say we forgot them, but what’s happened is that we’ve discovered a way to connect that we kind of missed.”

History-making re-dedication of England to Our Lady

The pandemic also forced a major change to Walsingham’s biggest event for decades: the rededication of England to Our Lady on March 29.

Armitage had spent three years planning the rededication, which was preceded by a two-year tour of England with the statue of Our Lady of Walsingham.

Catholics were due to gather at cathedrals across the country as the rededication ceremony took place at Walsingham. But when churches were ordered to close due to the pandemic, Catholics were asked to follow the ceremony live from their homes on the shrine’s website instead.

So many logged on for this historic rededication that the site crashed.

“The rededication of England was phenomenal,” Armitage said. “It overwhelmed our server. We had to transfer to YouTube. That rather took us by surprise.”

In his homily at the rededication, Armitage said: “We have long pondered and treasured the words of Pope Leo XIII to an earlier generation of bishops: ‘When England returns to Walsingham, Our Lady will return to England.’ In the hour of our need Our Blessed Mother has indeed returned to England.”

Armitage, a pastor from the gritty East End of London, was appointed rector in 2014 with a mandate to revive the shrine located deep in the Norfolk countryside.

Today he marvels that the rededication coincided with what may be England’s worst crisis since the Second World War.

“Three years ago, where did that come from?” he asked. “Was that just an East End rector trying to drum up some trade? If I was being a bit cynical I might think that. But no, not at all. It was very, very much Our Lady’s guidance.”

Our Lady of Walsingham

The shrine at Walsingham was established by the noblewoman Richeldis de Faverches after she experienced a series of Marian apparitions in 1061. Our Lady asked her to build a replica of the house where the Annunciation took place.

Msgr. Armitage, whose five-year term as rector ends in September 2020, said the pandemic crisis has given him new insight into Walsingham’s mission.

“When I first came here, the bishops asked me to develop the place. I thought that was about buildings. I realized eventually that it wasn’t about that. It was about the development of the message of Our Lady of Walsingham,” he explained.

“Wherever Our Lady appears, there’s always a message that she brings. The key to understand Our Lady is what happened after the Annunciation. She went on Visitation. And she’s not stopped since. Whether it’s her cousin Elizabeth or the children in Fatima, or at Lourdes or Guadalupe, Our Lady is always on the visit. That’s what your mother does, isn’t it? She comes to keep an eye on you.”

He continued: “Here at Walsingham, we had kind of lost the message, insofar as England had lost the message. What was the message of Walsingham? It was very clearly: ‘Share my joy at the Annunciation.’ So Walsingham is a Marian shrine of the Incarnation, and it’s about joy.”

Armitage hopes the 24-hour program will continue after churches reopen in England. Under current government plans, places of worship will be able to open from July 4, weeks after “non-essential” shops.

Armitage said that although the past two months had been exhausting, he was grateful to have been able to help people pray together during the lockdown.

“It’s such a privilege to be able to play a very small but very significant part in helping them to bear the agony and the loneliness in these last months,” he said.

“That’s not something we can stop. Prayer sustains people. And that is essential. That’s why — not wishing to be political — the government needs to recognize that for many people they need that presence in their life.”

He acknowledged that the cancellation of pilgrimages would strain the shrine’s finances.

He said: “Normal pilgrimages aren’t going to resume for at least 18 months to two years, which puts us in a very challenging financial situation, but along with the rest of the world. It’s not just that we don’t know where our next penny is coming from, many people don’t. We are sharing that anxiety.”

The shrine rector said he was looking forward to one more major event in the months to come. The Dowry of Mary tour, he noted, had not ended: the final stop, Westminster Cathedral, was canceled because of the pandemic.

“I believe there was a reason for that,” he said. “We’d booked Westminster as the last one, just before the rededication. But when we go to Westminster, it will be in thanksgiving. It will be a real thanksgiving.”