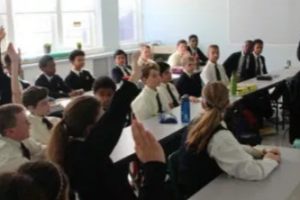 After nearly 20 years serving as a teacher and then vice principal at the mid-to-lower income, blue-collar school she had attended as a child, Mary Pat Donoghue entered St. Jerome’s door as its new principal in July 2009.

The remarkable transformation that took place at St. Jerome’s in Hyattsville, a once-unremarkable school tucked away on the wrong side of the D.C. beltway, can happen anywhere. The secret is to follow the same road map as St. Jerome from beginning to end — no shortcuts.

Prior to becoming principal, Mary Pat knew enrollment was down. Ten years earlier, the school boasted an enrollment of 562 students. Now it attracted barely 280. The decline had been attributed to schools in wealthier areas attracting more parents, along with a growing perception that Catholic schools were not worth the financial sacrifice. But that was it. No one even considered the possibility that something else was causing the decline.

It took a note from the archdiocese to begin the transformation. St. Jerome’s was on the chopping block. Registration would stop until a viable plan was presented. Regular meetings with the archdiocese were scheduled. Donoghue and Fr. Jim Stack, the pastor, were given a powerful and practical roadmap to follow.

The first step required facing the full truth about the school’s dire situation, right down to the exact debt amount, the true deficit, the accurate cost per student vs. subsidies and tuition, and the tipping point of decline. Step two was even more daunting: to have brutally honest meetings with all stakeholders (parishioners, families, teachers, and the wider community located within the parish boundaries) to determine the viability of continuing the school.

“November 2, 2009, the Feast of All Souls, was a horrible day,” recalls Donoghue. “At 3 p.m. we met with faculty and staff. At 6 p.m. we met with the governing boards of the parish and the school. And at 7:30 p.m. we met with parents, parishioners, and the wider Hyattsville community.”

Dr. Patricia Weitzel-O’Neill was superintendent at the Archdiocese of Washington at the time. “I remember Fr. Stack getting up to talk, with standing room only in the church,” she recounts. “The fact that Fr. Stack was willing to stand up and say, ‘We have a problem and here’s what it is. We have a mission. We need to have everyone help us recommit,’ was remarkable.

“Fr. Stack delivered a compelling, impassioned talk about the mission of the school, its impact on the future of the Church and society, and on the formation of the leaders of tomorrow,” Weitzel-O’Neill says. “He was very clear in articulating the mission of the school. He challenged the parents in the audience, asking them why they weren’t sending their children to this school.”

The large crowd in the church that night indicated school stakeholders had something to say. But absolutely no one expected what it would be.

After listening intently to Father Stack’s presentation, one by one, attendees stood up and spoke. Even more waited in a long line afterward to … Read more>>