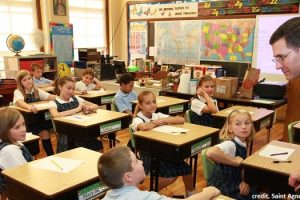 South Euclid, Ohio, recently passed a new city ordinance that adds religion, sexual orientation, gender identity and gender expression as protected classes under the law. The Lyceum, a Catholic school in South Euclid, has spoken out against this measure from the beginning.

Now that the city voted to pass this proposed ordinance, Alliance Defending Freedom has filed a lawsuit on The Lyceum’s behalf, in order to enable the Catholic school to hire employees who abide by Catholic teaching.

As the school states on its website, The Lyceum’s mission is “to form students who will become lifelong learners in a joyful pursuit of the Truth who is Christ.”

In order to pursue that mission, The Lyceum seeks to hire individuals that will aid those students in doing just that. After all, education does not only happen in the classroom. Faith must be lived out. It impacts all areas of one’s life.

It makes sense that a Catholic school would only hire employees who agree to live by a school’s religious beliefs, who set an example for the students in and out of the classroom. Being forced to employ people whose actions or beliefs conflict with the school’s core beliefs hurts the mission of the school.

Can you imagine if the Democratic National Committee, for instance, were forced to hire social conservatives? Or if People for Ethical Treatment of Animals (PETA) were required to hire bacon lovers?

Yet, that is exactly what is happening in South Euclid, Ohio.

All The Lyceum is asking for is the freedom to operate consistently with its beliefs and mission. That shouldn’t be too much to ask.

No government entity should be allowed to force a Catholic school, tasked with educating children, mind and soul, to partner with individuals who do not agree with the school’s mission. Especially not in the U.S.A. It is a violation of their Constitutional rights, and it should concern us all if religious organizations are not permitted to make employment decisions based on the very faith that is at the core of what they do.