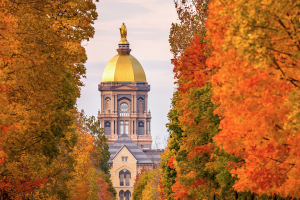 NR—It is a sad reality that, among students at the University of Notre Dame, it is becoming unacceptable to share Catholic Church teaching on matters of human identity and sexuality. A few weeks back, Notre Dame senior Mary Frances Myler — who serves as editor in chief of the Irish Rover, an independent student newspaper — published a column critiquing the ways in which the university has failed to apply the fullness of the Catholic tradition to its handling of gender-identity issues on campus.

The backlash among students was swift and predictable. Immediately, Notre Dame’s campus paper The Observer published a letter to the editor from one of Myler’s classmates expressing outrage at her column, and the paper issued its own editorial implicitly castigating Myler. Just this week, The Observer published a second letter from a student, chastising Myler in terms even more personally insulting than the first.

This most recent letter, from Notre Dame senior Sara Ferraro, is in many ways the standard fare we have come to expect from the woke campus denizen. It is not an argument so much as a bill of indictment, larded with emotion and hyperbole. It dismisses Myler’s editorial as hate speech. It excoriates her for using “she” and “her” when referring to the Church — a choice that follows biblical and historical tradition, Paul being unaware of Obergefell v. Hodges when he wrote his letter to the Ephesians — while describing the LGBTQ movement as “it.” (Left unexplained is whether that movement ought to be referred to as a “she” or a “he,” a binary that seems rather exclusionary according to Ferraro’s own logic.)