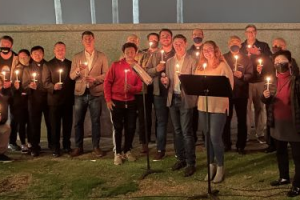 By CBJ staff and Joe Bukuras

The story below should never happen at a “Catholic” college or university. Never!  But it does happen, more often than most parents and grandparents realize.

So toxic—so anti-Catholic—is the environment at too many generations-old, formerly respected “Catholic” colleges and university campuses that students abandon their faith.  They either become “Catholic in name only” or worse.

After all, one should never find a Catholic college or university nurturing a campus environment that is oblivious to strengthening the opportunities and encouragement to live one’s Catholic faith—by example of professors and president, by the framework in which all subjects are taught, by the opportunities to develop life-long habits of living a life steeped in the principles and virtues Christ himself taught us.

Here is a prime example—one of MANY—in an article below by Joe Bukuras, reposted with permission, with sub-headlines by CBJ.

CNA—When Loyola Marymount University student Megan Glaudini heard that her university was NOT stopping an on-campus fundraiser for Planned Parenthood, she felt “convicted” that she needed to do something.

“Upon hearing about the Planned Parenthood fundraiser on campus, originally, I was just completely disgusted and embarrassed and, and disappointed that the university would allow this to happen,” she told CNA in a phone call Nov. 6.

“I took a while to kind of discern what I really wanted to do, what kind of action would even make a difference, and I really felt convicted and like I needed to do something,” she said.

LMU Students launch VITA, embrace the power of the Rosary


That “something” turned out to be resurrecting the long time, inactive pro life group, and planning a rosary rally before the Planned Parenthood fundraiser.

After meeting with an official in the university and many meetings, phone calls, and emails with students, Glaudini decided, “two days before the event,” to resurrect the campus ministry’s VITA program.

Leading VITA along with her friend, Andrew DiCrisi, Glaudini planned a rosary on the corner of Lincoln and LMU Drive on campus.

“I just feel like it’s my job here on this earth and especially on this campus to uphold the dignity and the values of my faith,” says principal founder Megan Glaudini, a junior at Loyola Marymount

Glaudini, a Junior theology major at LMU, told CNA the purpose of the rosary was to “emphasize the spreading of love.” Some groups on campus were making things political, she said, but her intent was to stand up for “human dignity and the right to life.”

“I just feel like it’s my job here on this earth and especially on this campus to uphold the dignity and the values of my faith,” she said. “And that’s exactly what I thought I would be doing if we created this group and we’re able to pray this rosary together.”

Another student group, Women in Politics, hosted the Planned Parenthood fundraiser Nov. 5 in LMU’s Roski Dining Hall. The club described the event on an online university calendar as “an opportunity for us to raise money for a cause we really care about and have fun at the same time!”

In a Nov. 3 statement, the university told CNA that it is neither sponsoring nor endorsing the event.

Glaudini’s rosary rally pulled in more than 20 people including faculty, Jesuit priests on campus, and students.

“Everyone was just very grateful that we had put this on because here on campus, it feels like the Catholic population is just diminishing and with that goes our values and our dignity,” said Glaudini.

“The professors and some of the professional staff really told me how refreshed they felt after what we have created because they felt like Catholic students wouldn’t care on campus that this Planned Parenthood fundraiser was happening, but we proved them wrong,” she said.

Glaudini said that the students who took part in the rosary rally were “so thankful” that they found other people on campus with like-minded values.

“A Catholic university should honor and defend the principles of Catholic Social Teaching, at the heart of which is the principle of human dignity.”

After the on-campus Planned Parenthood fundraiser was originally announced, it triggered a petition drive by an organization called RenewLMU that called on University President Timothy Law Snyder to cancel the event, which he did not. The group describes itself as “an alliance of students, alumni, faculty, donors, and other LMU supporters who seek to strengthen LMU’s Catholic mission and identity.”

Loyola Marymount graduate Samantha Stephenson, who led the petition drive for RenewLMU, told CNA: “A Catholic university should honor and defend the principles of Catholic Social Teaching, at the heart of which is the principle of human dignity.”