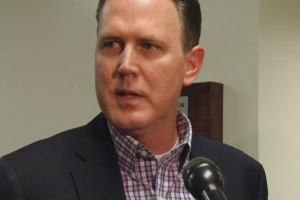 Special to the Catholic Business Journal—2019 Napa Institute, Napa, CA — Ted and Julie Sandmann (and in absentia, son Nick) accepted the Charles Chaput “Courage in the Public Square” Award at the recently completed 2019 Napa Institute. In a breakout session, the Sandmann’s detailed what they have suffered through as a result of Nick’s participation in the January 2019 March for Life in Washington, D.C.

This was Nick’s first trip without his parents. “Friends in the past had told them that they had a wonderful experience when they attended the March.” It was fully chaperoned and “safe.”

Then, as Nick was arriving home at 7 am after an all-night bus ride, he told his parents that a missing wallet was the least of his problems. He told him that he was being cast as a racist, a Nazi, and a bigot on social media. A firestorm that no parent ever signs up for was about to break.

On January 18, 2019, short videos were uploaded to popular social media platforms after the 2019n March for Life. These short videos showed an encounter provoked by well-known Native American activist, Nathan Phillips. The initial videos showed Phillips in an apparent confrontation with Kentucky-based Covington Catholic High School teenage students who were assembling to meet buses to take them home after the annual pro-life March.

The videos were only a minute long and showed Phillips standing toe-to-toe with the students as Phillips was drumming and the short mini-clips gave the impression that the boys, in particular 17-year-old Nick Sandmann, were harassing the Native American “elder.” But, as is now known and proven, this initial impression couldn’t have been farther from the truth.

CNN described the scene as “a smiling young man in a red Make America Great Again hat standing directly in front of the man, who was playing a drum and chanting. Other kids could be seen laughing, jumping around and seemingly making fun of the chants.”

The incident generated outrage on major news outlets, social media, by politicians and celebrities, with anger directed at Nick Sandmann, his fellow students, their parents and Covington Catholic H.S

U.S. House Representative Deb Haaland wrote, “The students’ display of blatant hate, disrespect and intolerance is a signal of how common decency has decayed under this administration. Heartbreaking.”

Actress Alyssa Milano wrote: “What are we teaching our young people? Why is this ok? How is this ok? Please help me understand. Because right now I feel like my heart is living outside of my body”.

The March for Life organizers, the Diocese of Covington and even Covington Catholic High School joined the fray, publicly condemning the actions of the students and extending apologies to Phillips.

The school said it would “take appropriate action, up to and including expulsion” after school administrators reviewed the situation.

Many others characterized these students as “entitled teens” and “children of privilege.”

Then the accurate, long story videos came out

Two days later on Sunday, January 20, a longer, 1-½ hour video surfaced, showing events before and after the “1 minute” incident and revealing much more about what actually took place.

As the fuller video showed, Immediately preceding the encounter with Phillips, an activist group of five, self-described Black Hebrew Israelites shouted insults at the students. They called the students “a bunch of incest babies”, future “school shooters”, and “dirty ass little crackers”, and said “you give faggots rights.”

The longer videos also showed that it was Phillips (not Nick Sandman nor any of the students) who had approached and provoked the Covington High students.

As the longer videos revealed, Sandmann and his fellow students could not back away from Phillips due to crowded steps, so the students were forced to remain in place. Put simply, they couldn’t move.

Once the long videos surfaced, it became quickly clear that the earlier short clips, incendiary posts and knee-jerk media coverage that immediately followed those short clips had grossly and unfairly misrepresented or omitted critical details of the incident.

But the damage to Nick, his family, and the school had been done.

Today, there are over 627,000 results if you search on Nick Sandmann’s name. As his parents noted in their presentation at the Napa Institute, “He will never escape the false narrative that condemns him as it lives on forever on the internet.”

As a result of the damage caused, the Sandmanns are pursuing litigation and legislation to achieve four goals:

Only the local Fox affiliate in Sacramento issued an apology.

And while Bishop Roger Foys of Covington issued a public apology, he never apologized personally to the Sandmanns.

The Sandmanns further noted that the “race card” and the “Nazi card” are being used to gain power.

“It is a small group of people in power who can determine the fate of millions…,” noted Ted Sandmann, Nick’s father. Using an analogy to the Civil War, Mr. Sandmann further noted that “the majority of South did not want to secede from the Union, but their fate—and that of hundreds of thousands who lost their lives—were sealed by a small group in power.”

“Information is being weaponized,” Mr. Sandmann continued. “Anger is stoking the fires of our worst impulses. We must garner the courage to stand up to the tyranny of thought that is being imposed on this nation by those seeking to destroy our liberty and the values we cherish.”

The 9th Annual Napa Institute was held at the Meritage Resort and Spa in Napa Valley with a record 700 scholars and Catholic leaders attending. The Institute was formed to help Catholic leaders face the challenges posed in the “next America” — to continue the work of the Apostles and their successors, the Bishops, heeding Christ’s call for ongoing evangelization.

Thomas M. Loarie is the CEO of BryoLogyx, a host of THE MENTORS RADIO SHOW, and a senior editorial advisor and columnist for Catholic Business Journal. He may be reached at [email protected]