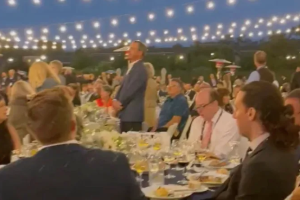 Pro-abortion protesters tried to disrupt a conference of Catholics leaders held over the weekend in Napa, Calif., but they soon gave up when their rauckus chants were drowned out when 800 conference attendees began singing “Salve Regina,” a hymn to the Virgin Mary.

The July 30 incident, which later became a viral sensation on social media, took place at the 12th annual summer conference of the Napa Institute, a group dedicated to equipping Church leaders to effectively evangelize an increasingly secularized society.

Austin Quick, who was attending the conference at the Meritage Resort and Spa in Napa, told CNA that former Attorney General William Barr had begun his keynote address on Saturday night when he was interrupted by chanting.

Quick, a military veteran, said he rushed outside to see if he could engage with the protesters to get them to stop. He said there were six or seven women shouting and playing what appeared to be prerecorded chants through a loudspeaker system that were “mostly about abortion.” Among the chants: “You can’t take us back to the 1800s,” “Motherhood should be a choice,” and “Get your rosaries off our ovaries.”

That’s the moment that the conference crowd joined together in prayer, followed by the singing of “Salve Regina.”

“Right when the singing started that’s when they left,” Quick said, adding that the demonstrators returned to their cars and honked their horns.

Quick, who runs an Instagram account called The Basic Catholic, said he later learned that a priest from The Fathers of Mercy in Kentucky started the prayer and the singing of the hymn.

The response of the Napa conference to Marxist protestors screaming like maniacs outside.
After this…they were quiet.
I love being Catholic. pic.twitter.com/txQQoZMukt

Chris Stefanick, an EWTN host and creator of the popular “Real Life Catholic” video series, was a witness to the scene and shared a viral video of the incident.

He posted on Twitter: “The response of the Napa conference to Marxist protestors screaming like maniacs outside. After this … they were quiet. I love being Catholic.”

After the event, several groups posted on social media that they were among protesters at the conference. The small, loud and disruptive chanters—whose actions echoed that of Marxist activists—later took to social media to promote their failed efforts. These Marxist-oriented activists identified themselves as the NDN Collective (claiming to represent concerns of indigenous people, although they brandied a pro-abortion sign that read “Bans off Our Bodies”) and Survivors Network of those Abused by Priests (SNAP).

Catholic Business Journal wonders why anyone who claims to represent indigenous people or abuse victims would be hell-bent on allowing and fostering the killing of innocent unborn infants—who are sadly, the ultimate abuse victims!

The Napa Institute was founded in 2011 by businessman Tim Busch and Father Robert Spitzer, S.J., to immerce Catholic leaders in faith formation and apologetics, equipping them for evangelization in the next generation. The Busch Family Foundation is also a major donor to The Catholic University in Washington, D.C., and helped establish the university’s business school.

The conference, which this year took place from July 27–31, included daily Mass, opportunities for prayer and Confession, as well as lectures and panels on St. Thomas Aquinas, the New Evangelization, reading the Bible, Catholic education, the evils of human trafficking, a Catholic vision of women’s rights, and life after Roe v. Wade, among other topics.

Barr’s speech, titled “Strangers in a Strange Land: How Do Catholics Live as ‘Resident Aliens’ and Faithful Citizens at the Same Time,” purposely paralleled the title of Catholic novelist Walker Percy’s posthumously published book of essays, Signposts in a Strange Land.

Culled from CNA, other news sources and some original content by Catholic Business Journal.