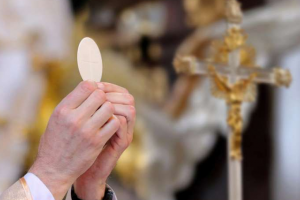 More than 25 cardinals and bishops will take part in the International Eucharistic Congress in Budapest, which will include Cardinal Charles Maung Bo and Cardinal Robert Sarah among its speakers.

The International Eucharistic Congress, a celebration of the Real Presence of Jesus Christ in the Eucharist with participants from across the world, will take place in the Hungarian capital Sept. 5-12.

Bo is the archbishop of Yangon, the former capital city of Burma, while Sarah served as prefect of the Vatican Congregation for Divine Worship from 2014 until his retirement in February this year.

The event’s program lists cardinals from five continents as leaders of the congress’ morning prayers, catechesis, testimonies, and workshops.

The program also includes lay Catholic speakers such as Mary Healy, a professor of Scripture at Sacred Heart Major Seminary in Detroit, and Barbara Heil, an American mother of eight who converted to Catholicism after serving as an evangelical missionary in 55 countries.

The 52nd International Eucharistic Congress was originally scheduled to take place in 2020 but was postponed to 2021 due to the coronavirus pandemic.

Pope Francis has said that he plans to visit Hungary to take part in the closing Mass on Sept. 12 in Budapest’s Heroes’ Square.

Cardinal Péter Erdő, the archbishop of Esztergom-Budapest and host of the congress, told CNA in February that he believed that the event would be “a great sign of hope” amid the pandemic.

“Many parishes have learned how to broadcast liturgies online, but they also experienced that nothing can replace the personal presence,” Erdő said.

“That is how the motto of the Congress becomes reality and gets a new meaning: ‘All my springs are in you’ (Psalm 87:7).”

Each day of the Eucharistic Congress will include Mass, as well as cultural and spiritual events around the Hungarian capital.

The International Eucharistic Congress dates back 140 years. The first congress took place in France in 1881.

It has been held every few years in a different city and has crossed the globe, taking place in Jerusalem, Nairobi, Melbourne, Korea, the U.S., and throughout Europe.

The last congress was held in Cebu, Philippines, in 2016. There were 12,000 participants at the congress, though millions took part in associated Masses. Hungary last hosted the Eucharistic Congress in 1938.

The Vatican announced last month that Pope Francis has designated the Archdiocese of Quito in Ecuador to host the 2024 International Eucharistic Congress.

Manuel Mejía, the Ecuadorian Minister of Foreign Affairs, wrote on Twitter April 21 that he expects that the pope will visit Ecuador in 2024 for the 53rd International Eucharistic Congress.