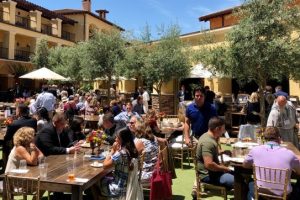 by Karen A. Walker — Now in its ninth year, the Napa Institute has evolved into a wide grouping of interesting persons—lay men and women, religious orders, and clergy of every rank, each passionately following remarkably unique and varied paths, yet each profoundly united in a shared priority to obey and serve God fully with their lives. Fully Catholic. Fully alive… and always interesting.  (featured photo by Tom Shakely)

I’ll try to paint a picture.

This year, once again, a good portion of Tim Busch’s The Meritage exudes almost an “extended family reunion” atmosphere among seasoned Institute participants, old and new friends. In addition, there’s a constant muffled buzz of new explorations, new transformations taking place—and not just those formed in the early-in-the-week planned board meetings of several organizations.

Nor is this buzz merely from the exceptional insider learning any attendee can access from an abundance of exceptional speakers and presentations that include bishop panels on topical current issues and Fr. Spitzer’s latest projects and insights, to a myriad of sessions by active Catholic leaders nationwide who are at the bleeding edge, addressing numerous current and pressing issues.

The muffled buzz is generated also from quiet, one-on-one conversations here and there, among old friends and new acquaintances, learning about each other’s projects and considering various collaborative arrangements.

Various kinks and hiccups have smoothed themselves out over the past eight years. Onsite staff and the under-girth of preparation, superb organization and consistent sponsor opportunities have settled into a familiar rhythm. And, as has always been the case at the Napa Institute, but more prominently this year, the reality that attendees fundamentally share in common so much of what’s most important in life provides a natural breeding ground for deeper receptivity, learning, trust, partnerships, collaboration and more.

All this, against a backdrop of several daily Masses held throughout the day, many accompanied by beautifully executed sacred music courtesy of various choirs and musicians, as well as abundant opportunities for Confession and Spiritual Direction, daily Adoration of the Blessed Sacrament and more.

Is it any wonder that the Napa Institute has become the catalyst for much good.

Here’s an example of what I mean.

Catholic Business Journal reporter Tom Loarie continues to cover the Institute each year with many insightful articles culled from the Institute’s speakers and highlights, as he has done for the past eight years.

On the other hand, I was only able to attend one day this year, Friday.

But in that one day, just within the first hour of arriving, I happened upon an available opportunity to receive the Sacrament of Reconciliation that resulted in receiving some important recommendations for my life (in less than 10 minutes, mind you).

In that same first hour, I met and enjoyed a fascinating conversation with a seriously Catholic, down-to-earth, prominent commercial builder whose legacy includes overseeing the building of one of the largest buildings in San Francisco (SalesForce building), and also The Meritage hotel, to name a few projects, and who currently manages a crew of 350 on another significant San Francisco building project that is near completion.

Tell me, how many times have you seen an enormous, hi-rise construction project in a big city, and even remotely imagined that the guy overseeing hundreds of construction crews is a serious Catholic? I sure never considered it.

To make this spontaneous meeting more interesting, I learned that he and his beautiful, athletic wife are permanently relocating in a few months from longtime residence in Southern California to live in Assisi, where they will offer local tours. Neither are Italian. But they love it there and that’s where they’ll be. My jaw is still open (with a smile).

That conversation morphed into a passing invitation to attend a private Mass being held momentarily. Sure! Having left early to attend, I had wondered how I’d fit Mass into the day and not miss anything at the event, so it was perfect timing. Attending this Mass were only five lay people and the rector of the National Shrine of Saint Francis of Assisi in San Francisco. Small, simple, intimate, and just the sermon I needed to hear that day.

After, I met each vendor on both sides of one long vendor corridor, learning of such diverse projects as FOCUS (which is not new to me, but meeting so many FOCUS college evangelizers was new), a number of innovative pro-life organizations; the organizers of Formed; a brilliant Jesuit priest – a friend and colleague of Fr. Spitzer – whose life mission is expanding the availability and accessibility of St. Ignatius of Loyola’s unmatched-in-excellence 30-day retreat to wider audiences, just to mention a few. Another vendor corridor included first-class jewelry artistry, Saint Luke Productions, Thomas Aquinas College, Benedictine College, and many more.

As the day continued, so did the remarkable meetings …

The Sanctuary of Culture held a reception introduction to learn the wonder, invaluable purpose and the challenges of the Vatican Library and its centuries-old art and antiquities collections. Key managers of the Library were present from Rome, as were four exhibits from its vast collections.

On the way to the reception, a chance (?) Providential meeting with the new executive director of AmazingParish opened new opportunities and understandings — in just a 15 minute conversation.

Dinner ended my day, at a table that happened to include the co-founders of Fuzati, a firm I’d heard about but with which I had no immediate connection or knowledge; a sharp woman focused on bringing Alfie Evans’ story to the world, and a priest who—near the end of dinner it suddenly dawned on us both—was the younger brother of college mates of mine. Go figure!

Did I mention the afternoon presentation of Saint Luke Productions’ latest drama, Tolton: From Slave to Priest. No dry eyes. Stunning actors and innovative choreography brought this real-life story of a soon-to-be-ordained saint to life. Absolutely moving and I highly recommend bringing it to your parish as a fundraiser.

That was just ONE DAY at the Napa Institute, for ONE PERSON.

You’ll hear much more profound remarks and insights in Catholic Business Journal’s additional coverage of the Institute, whereas this article is merely an overview introduction to the 2018 Napa Institute. Suffice it to say: Stay tuned, you’re in for a real Catholic treat of soon-to-be-published articles!