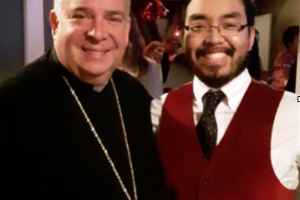 Photo: Jeremy G. Vinluan with Bishop Nelson Perez of the Diocese of Cleveland at a Theology on Tap event in West Cleveland.

In an age of enlightened tech communications, when is the last time you received a handwritten letter? For younger readers, the likely answer to that question is “Never.” But what if you were to open your mailbox this morning to find, hidden among the many advertisements and bills, a lone envelope containing a much-needed message of encouragement hand-addressed to you personally?

Thanks to a young Catholic professional in Cleveland, Ohio, this is one experience that just might be becoming a little less rare.

Jeremy G. Vinluan, 30, grew up in Virginia Beach, VA, and Gulfport, MS. But that is not where he stayed. His college and job trajectory hints at his sense of adventure.
After graduating from the University of Dayton in 2012 with a BA in Journalism, Mr. Vinluan worked as coordinator for The Holley Institute in Detroit, MI; as administrative assistant to the executive director of the New York School for the Deaf in White Plains, NY; and as volunteer and community outreach coordinator for Deaf Iowans Against Abuse in Cedar Rapids, Iowa. Mr. Vinluan now serves as Operations Manager for the Community Center for the Deaf and Hard of Hearing at the Cleveland Hearing and Speech Center in Cleveland, OH. His family, however, remains in Virginia.

Born with normal hearing, Mr. Vinluan gradually lost most of his hearing as a child and eventually received cochlear implants. The implants partially restored his hearing ability. Not one to be discouraged by life’s challenges, Jeremy certainly hasn’t let his hearing challenges slow him down.

“I never dreamed of working so far from my family,” he says, “but life is always an adventure.”

We caught up with Mr. Vinluan to ask him a few questions not only about his work and background, but also about his most recent Catholic passion project: Writing one, hand-written letter a day for the duration of the season of Advent 2019.

Catholic Business Journal (CBJ):  Missionary saints like Francis Xavier are famous for journeying to the ends of the earth. As someone who has moved around a lot for work these last few years, are there any saints with whom you share a special relationship?

Jeremy Vinluan:  I can think of three off the top of my head. So, Blessed Adèle de Batz de Trenquelléon, Saint Francis de Sales, and Mother Mary. Mother Mary has shown me what it means to be a true servant of Christ in the face of challenges and sufferings. Blessed Adèle wrote numerous letters in her short life. Many people know Saint Francis de Sales as a patron saint of journalists and writers, but do not know that he also happens to be patron saint of deaf people.

CBJ:  In that case, Saint Francis de Sales also has a special connection to the work you moved to Cleveland for. What can you tell us about your profession?

Jeremy Vinluan:  Right now, I’m the Operations Manager for a community center that supports the deaf and hard of hearing community in Northeastern Ohio. I work closely with my supervisor to make sure that all of our operations go smoothly, such as our ASL program, Support Services program, Vocational Rehabilitation Services program, and Domestic Violence & Sexual Violence Victim Support Services program. You could say I’m the right arm of my supervisor, who is the director of the Community Center for the Deaf & Hard of Hearing. Before this, I used to work in Iowa as a volunteer and community outreach coordinator for Deaf Iowans Against Abuse, which is another company that works with the deaf.

CBJ:  What made you decide to relocate to Cleveland for your new position?

Jeremy Vinluan:  Easy: There was an opening! Shortly after I left Iowa, I was looking for jobs and happened to find one here in Cleveland. At a friend’s wedding in Ohio back in March I met a man named Michael Mayer, who encouraged me to apply to Cleveland, even though I didn’t know a lot of people there at the time.

CBJ:  Was it difficult to move away from your family so close to the holidays?

Jeremy Vinluan:  I moved here in the last week of September, so it wasn’t really that challenging. The last weekend before I moved, my mother was in a car accident along with her two sisters, so that was difficult. Someone ran a red light and totaled the car they were in. Thankfully she and my aunts are doing okay now.

CBJ:  You seem to have a strong sense of mission in terms of helping the deaf community. Do you find your Catholic faith impacting your work?

Jeremy Vinluan:  I would say it plays a huge part. I have learned that I can relate to a lot of deaf people, even though we’re so different and diverse in terms of education, language, communication, life experiences and many other things. But I can relate to them because I can understand their frustrations. I can understand their frustration about communicating. I’ve met a lot of deaf people, not only in my work, but also in my personal life, who struggle to have communication access. You know, they have a right to communicate with hearing people, just as hearing people can communicate with hearing people.

CBJ:  What are some things you do to make their lives easier in this regard?

CBJ:  Before we move on to talking about your project, what does the Advent season mean to you as a Catholic?

Jeremy Vinluan:  It’s the first season of the Church calendar, and for me it’s pretty much about slowing down after the whole calendar year. Just to slow down and prepare myself for the coming of Christ. And, of course, to also prepare myself for the new year. Last year, for example, I gave up my “hearing” almost every day during Advent. The only time I allowed myself to hear with my Cochlear Implants was during Mass, and that was it.

CBJ:  You’re already pretty well known for your letter writing, as readers of Cleveland’s Plain Dealer know. What can you tell us about your recent Advent Letters project?

Jeremy Vinluan:  I decided to make my 2019 Advent special by writing one letter each day to somebody I’ve met this year who has a connection to Ohio and Christianity, or just to someone who celebrates Christmas. I enjoyed writing during my secular project, my “30 Days From Cleveland” project, where I spent each day in the first 30 days after moving to Cleveland writing a letter to somebody either in Cleveland or near Cleveland. Somebody I’ve met, or somebody I don’t know, that has some connection to me. I really enjoyed it, but I wanted to make it more special by making my next project go deeper in the spirit of Advent. So it made sense for me to do something spiritual for Advent, rather than secular.

CBJ:  How did you choose the people that you write to for your Advent project?

Jeremy Vinluan:  I would say it’s by feeling. Sometimes it comes to me during Adoration, or maybe it just comes to me the moment I wake up in the morning. And to whomever I write, I say my daily Rosary for that person.
After I pray the Rosary, whether it’s morning or evening, I then write my letter to them. Most of the letters I’ve written this Advent were in the evening, because I usually have more time. So in a way it’s also another sacrifice for Advent, that I decided to give up that time for myself and use it for writing to somebody instead.

CBJ:  Is there any specific impact you’re hoping to have on the people you write to?

Jeremy Vinluan:  That’s a good question. I do not know. Actually, it’s funny, because I wasn’t even thinking about making an impact. I just wanted to write a letter to them, to say Happy Advent and that I prayed the Rosary for them. And hopefully, that prayer will help them to get closer to Jesus as we get closer to Christmas day.

CBJ:  What kind of response has your project had thus far? Has anybody sent you any reply?

Jeremy Vinluan:  Nobody writes back. (laughs) But for example, I met a guy I wrote to at Theology on Tap in the middle of December. He told me that he got my letter. He let me know that the letter was a surprise and that he appreciated it.

CBJ:  What’s your impression of the young Catholic community in Cleveland so far?

CBJ:  Having made your transition from Iowa to Cleveland, what do you think a young professional should consider before they relocate for work?

Jeremy Vinluan:  Well, I am never alone. Anybody who relocates needs to know that they are not moving alone. They are moving with a lot of people in their hearts. That means their family, their friends, and even God. It was hard to say goodbye to my young adult community when I left Iowa, but I had to do it because it was time for me to go and find my next adventure in life.

CBJ:  What other tips can you offer for other young Catholic professionals? For example, what sort of prayer would you recommend?

Jeremy Vinluan:  There are two things. One, pray the Rosary every day. Second, write a letter to a stranger. Whether that person is Catholic or not, write them a letter. They will be surprised to get a letter from you, and they will be humbled that somebody has taken the time to write a letter to them.

Just in case merely receiving a handwritten letter — in cursive! — isn’t personal enough for those he writes to, Mr. Vinluan doesn’t conclude with his full name. Instead, he signs off with the nickname used by his family: “Jem.”

Whatever the future holds for him, we can be sure that Jeremy Vinluan has already made this past holiday season a special one for his new community in Cleveland, Ohio.