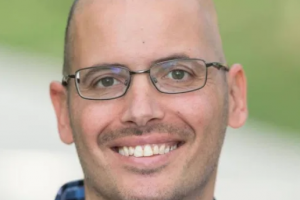 Everything about Nick Thomm exudes the principle: Do what you love, anchored in Christ!

In the case of this unique Catholic Business Profile, the much-loved, devout Catholic, understated and ever positive Nicholas Alexander Thomm, former executive producer at Ave Maria Radio in Ann Arbor, Michigan, died November 24, 2020, after a 14-year battle with brain cancer. He was 41.

Although he was granted just 41 years on this earth, Nick Thomm definitely earned a place among our inspiring Catholic Business Profiles, as you’ll see.

The video below on Nick Thomm was created by Openlight Media, with producer Sister John Dominic, a co-founder of the Dominican Sisters of Mary, Mother of the Eucharist, and close friends with the Thomm family.

Known as “Nick” to friends, family, and, well, everyone else as well, Thomm worked for Kresta in the Afternoon, a long-running show hosted by Al Kresta on Ave Maria Radio. Thomm’s voice was familiar to many listeners from his daily presentation of the news.

We at Catholic Business Journal came to know Nick during an eight-year period during which we produced a popular, live business radio program, The Catholic Business Hour that aired on EWTN.  Ave Maria Radio handled the technical part of the live production, connecting our host with the airwaves, and with guests and callers.

“Nick was very special,” recalls Dick Lyles, former host of The Catholic Business Hour and long-time CEO of Origin Entertainment, the studio that released the FATIMA movie in Summer/Fall 2020.

“Nick was always gracious, friendly and respectful,” Lyles says. “I loved working with him!”

“If Nick were producing our program, a weight was off my shoulders because I knew there would be no problems,” remembers Karen Walker, executive producer of the program.

“I grew to know Nick a little bit over time,” Walker continues. “He was always present, in the moment. Always direct and kind. Understated, friendly, ready to serve.

“When he talked with you, Nick was fully present, not distracted, even if it was for literally 45 seconds when he called back while producing another live show during the week. I can’t say enough good things about him.

“It was years before I learned Nick was dealing with a brain tumor.  I was stunned.” Walker says.

“And even then, it was mentioned almost as a passing response to a casual question. He put it in a positive light and moved on.  Of course we prayed for Nick’s full recovery after that, and for his family, but he had made it sound like recovery was a clear path.  Positive.

“Needless to say, watching the short video of his life (view below) was very moving for me.” Walker concludes. “Absolutely Inspiring!  Nick lived life to the full, fully in Christ!”

Strong family life and a Passion for learning, achieving and self-improvement

It was at Steubenville that Thomm met his future wife, Jennifer Simpson. (you must see the video below!) They married in 2001.

“Nick was an extremely driven individual even at a young age and earned the rank of Eagle Scout during his high school years,” Mrs. Thomm explained, adding that “Nick won the local, state, and national Right to Life speech contest as a high school senior sharing his experience of the gift of adoption.”

Thomm was a reporter for the local Steubenville newspaper, The Sun Times, and later for Credo, a Catholic newspaper. In 2002, he joined the staff at Ave Maria Radio.

When Al Kresta hired him, he was impressed with Thomm’s strong sense of mission.

Thomm served as executive producer, news director and movie critic. He introduced a segment to the end of each newscast called Fascinating Fact.

“The program was much richer because of his service over the years,” Kresta said on-air this week.

Thomm was diagnosed with a brain tumor in 2006, just after his 27th birthday. It was the beginning of years of surgeries, radiation and chemotherapy.

Nick’s wife, Jennifer, added that her husband “intentionally and joyfully offered his suffering for others, and he and his family adopted the motto Jesus, I trust in You.

Nick endured his deteriorating health with great patience and great faith. His purification through suffering was very apparent to those around him and he didn’t waste a second. His mission was to suffer well.”

Condit said Thomm had a “great ability to think on the fly” and to interview a wide variety of people, from young children to cardinals. “He just had a gift to relate with everybody.”

Thomm also had an “enduring love for his family,” he added.

In addition to his wife Jennifer, Thomm is survived by three children, Sarah, David, and Andrew; his parents, Elizabeth (Martin) and Ralph Thomm; and a sister, Maureen (Marty) Crawford.

The family asks that donations in lieu of flowers can be made at oceanoftrust.com.