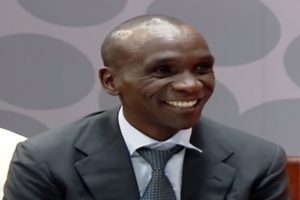 Eliud Kipchoge broke the marathon world record in Berlin in September with a time of  2:01:39. That’s TWO hours and slightly over one minute!  To put it it into perspective, in the same amount of time it took you to drive two hours away, Kipchoge RAN 26.2 miles without stopping!  He didn’t even look tired when he crossed the Finish Line!  (he was tired, of course, but not visibly)  You have to see it to grasp the beauty of it—the video is below.

BUT here’s the even greater beauty of this humble Kenyan athlete: Eliud Kipchoge is a serious Catholic.  At the end of every race he kneels down, bends forehead to ground, and makes the sign of the Cross in thanksgiving! (some of us may even marvel that after running so far so fast this father of three can even get his fully exhausted 31-year-old body to kneel AND get up again!)

Earlier this year, in a carefully monitored study by Nike, Kipchoge blew away his super-elite teammates at the end of their private marathon, breaking the record he publicly set in Berlin.  At the Nike private marathon Kipchoge clocked a 2:00:24 mile — merely 25 seconds shy of breaking the 2 hour mark — the fastest time ever recorded for a marathon!

Two years earlier, Kipchoge finished the London Marathon in 2:03:05. That is to say, he was two years younger than he is now and his race time was one 2 minutes and 6 seconds slower.  Go figure!

In today’s profile, we bring you an insider look at what you don’t see on race day.  The daily self-discipline, training and focus.

In fact, Eliud says it’s not the legs, but the heart and mind that win the race. Every time.

The article below is well-worth reading since the core principles in endurance training echo those needed for succeeding ethically in any business, especially for a faith-driven Catholic business professional. At the end you’ll find links to more videos and live interviews with Eliud Kipchoge, but first read on.

Quoting from an article in Runners World, here’s an inside look at this Kenyan Catholic, Eliud Kipchoge—the man who runs 26.2 miles just barely more than a minute shy of two hours: The Simple Life of One of the World’s Best Marathoners (Runners World)


To prepare, he cleaned toilets and chopped vegetables between training runs.

A little before 5 a.m. each day, in a small village in western Kenya, one of the world’s most talented marathoners rolls out of bed, slowly shakes the sleep from his eyes and gets ready to run—fast.

By the time Eliud Kipchoge breaks into stride at 5:50 a.m., the sun has yet to rise over the dusty, ochre-red roads of Kaptagat. At least a dozen others run with him, hoping if they do what he does, then maybe—just maybe—they can become what he is: a champion.

Kipchoge, 31, is a sporting hero in Kenya, a self-made millionaire whose way of life bears no trace of grandeur. Most of the time, in fact, he chooses to live like a pauper.

The reason is simple: When it comes to the marathon—the event at which he’s been undefeated since 2013—maintaining a ravenous hunger is not just helpful; it’s a fundamental requirement.

“Athletics is not so much about the legs,” Kipchoge said. “It’s about the heart and mind.”

He should know, for the workouts he’s done to prepare for his title defense at the London Marathon on Sunday have put his heart, mind, and legs under all kinds of duress.

His weekly staple is 13 hard three-minute repetitions with one minute steady between, part of about 130 miles per week he runs. Another favorite is a 20-mile run at a shade more than five minutes per mile, completed on terrain so undulating and in air so thin—at 8,000 feet—that most ordinary runners would gasp for oxygen on a gentle jog.

But Kipchoge is anything but ordinary. Over the last three years he’s taken major marathon wins in Chicago, London, and most recently in Berlin, where even a pair of malfunctioning insoles and blistered, bloodied feet couldn’t halt his rise to the marathon throne in his best time of 2:04:00.

That success has brought great wealth, but it has also brought great suspicion, given his sport has been mired in scandal. Kipchoge, however, says he’s done it the right way.

“Doping is something I get upset about,” he said. “We need to get rid of that attitude of looking for money and plant the seeds with hard work instead. This sport is noble. It should be people competing in a clean way.”

In recent years, faint smoulders of suspicion about Kenya’s anti-doping system have grown into thick clouds of cynicism, with 19 of the country’s athletes now serving doping bans. The World Anti-Doping Agency has given Kenya until May 2 to bring its testing program in line with the global code or risk exclusion from the Olympics.

“I think Kenya will comply and everything will be okay,” Kipchoge said. “We get tested everywhere. I sometimes get tested twice a month. I know people are shocked when they read about Kenya on the internet, but it’s only a small percentage [who are doping].”

Last year the IAAF conducted 526 tests on Kenyan athletes, including at least four on Kipchoge, and he is also subject to out-of-competition testing by the World Marathon Majors.

So has anyone—doctor, agent, or coach—ever tried to lure Kipchoge to the dark side?

“No,” he said. “Never. I don’t think Kenya is as bad as it’s being broadcasted. It’s a few individuals.”

In an era of marginal gains, Kipchoge’s approach is distinctly low-tech. He consumes milk from cows that roam the fields near his camp and his meals center around rice or the Kenyan staple of ugali, with an occasional helping of beef.

“I’m not having any problems with my body so I don’t need to supplement,” he said. “Growing older you don’t recover as fast, but all-in-all I’m doing well.”

That’s an understatement, but one which says a lot about Kipchoge’s attitude. His nature is humble, his routine methodical.

“Eliud is somebody who has a very clear, organized, stable mind,” said Valentijn Trouw of Global Sports Communication, who manages Kipchoge. “That’s what makes him stand out. Of course he wants to succeed, to win and break records, but his focus is on what is needed every day.”

It’s a spartan lifestyle; when Kipchoge returns to camp each morning, he showers and eats before surveying what chores he’s due to complete that day.

Sometimes it will be chopping vegetables for the communal dinner, other days it’s trimming the garden, and yes, some days the world’s best marathoner even has to clean the toilets.

“It’s a basic set-up,” Trouw said. “The camp was set up for juniors and upcoming athletes who had no finance. It was in our mind that when somebody was established they would live outside, but then athletes said, ‘No, we want to stay.’ Eliud realizes that to succeed in the marathon, it’s difficult to do it alone.”

One of the camp’s younger athletes who’s watched and learned from Kipchoge is Geoffrey Kamworor, who trounced the field to win the IAAF World Half Marathon Championships in Cardiff last month.

“Eliud really he is like a brother to me,” Kamworor said. “I always make sure I’m around him to be like him and always do what he’s doing. He’s my role model.”

The pair trained together six days a week over the last few months, and ahead of this weekend’s race, Kamworor has an unparalleled insight into Kipchoge’s form.

For the past several weeks, Kipchoge has chosen to share a tiny room in Kaptagat with one of his training partners instead of reside at his spacious house in Eldoret, where his wife and three children live.

It’s a bare, sacrificial existence, but when it comes to training, Leonardo had it right: simplicity is the ultimate sophistication.

“Being away from the kids is really hard as they all want to see Daddy,” Kipchoge said. “But I stay in training camp because of my memory of being motivated. We share ideas and show the young guys that it’s good to live together.”

Between training sessions, Kipchoge rests for most of the day, taking an hour-long nap and hand-washing his gear before his second run at 4 p.m. After dinner, the group sometimes plays games, but bedtime is no later than 9 p.m.

In the evenings, he reads motivational books. Kipchoge’s favorite is Stephen Covey’s The 7 Habits of Highly Effective People. The book’s premise is that proactive people are more likely to alter their situation and succeed in life.

As a child, Kipchoge could never have foreseen the success that awaited, but he was … Read more>> (very much worth continuing!!-ed.)