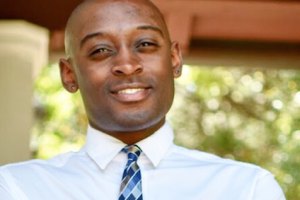 In the words of the American writer William Arthur Ward, ”The mediocre teacher tells. The good teacher explains. The superior teacher demonstrates. The wise teacher inspires.”

To become principal at age 26, after just five years as a beloved homeroom and 5th grade teacher at the school he attended a decade earlier and after being honored in 2017 as KRON 4 Teacher of the Week, demonstrates without words the remarkable character and leadership gifts of this young man.

“He has a unique gift of making each student feel special,” KRON 4 culled from those who nominated Kenneth. “He gives freely of his time and effort and demands that each student reports to school each day “ready to learn.” … He is in constant communication with parents and always available… always stepping up … most recently, he took on the role as coach for the 8th grade basketball coach rather than have the students forfeit the season…”

But for Kenneth, although he is grateful and appreciative of the honor, he’s just following his dream and doing what he loves to do: Inspire others, especially those who need it most.

“I knew that I wanted to be a teacher at a very young age,” says Farr. “My teachers always inspired me through their constant effort to making learning fun. …Teaching provides me the opportunity to serve children who need adults who inspire them in their lives.  ”

“When I was young,” Farr adds, “I always had a dream to come back to St. David School to teach. To be back in a community that played a huge part in the successes I have achieved means the world to me. I am passionate to ensure our students receive a quality education and great experience, just as I once did.”

Kenneth is modest about his achievements.

After attending K-8 at St. David Catholic School, he attended Salesian College Prep in Richmond where he played on Salesian’s first State Champion basketball team. Immediately after his 2010 graduation, he attended CSU East Bay for four years, playing Collegiate Men’s Basketball all four years and receiving a Bachelor’s Degree in Liberal Studies with a minor in Human Development in 2014. From there, he earned a Multiple Subject Teaching Credential from Saint Mary’s College of California in 2015 and then a Master’s degree in Teaching from the same college in 2017.

If you’re quick at math you might have noticed those last two degrees coincided with his full-time teaching job.

Not a problem for Kenneth. He loves challenges.

When you look at Kenneth’s life so far, there seems to be a beautiful continuum and a rising up for the next challenge and the next—whether in life, athletics, academics, profession; almost a calling… a calling that always comes back to inspiration and students.

Even in college Farr proved himself able to juggle a lot of balls (basketball pun intended).

In a 2011 interview with Cal State East Bay, having been chosen to receive one of only 10 California State University, East Bay African American Faculty and Staff Association (AAFSA) Scholarships, it’s evident Kenneth was mastering skills that will serve him well as today’s principal.

“I love challenges,” Farr noted in the 2011 interview. “I organize my time really well, which helps a lot. There will be days when school and workouts can overwhelm my day and I have to give up a social event, but that’s all a part of being a student-athlete.”

The CSEB Pioneers did indeed have a terrific basketball season that year, becoming eligible to compete in both the conference and national championships.

So now, with Kenneth’s newest challenge as the new principal of St. David Catholic School — a challenge Farr embraces with full heart and focus on students first — many anticipate an exceptional new season at St. David’s school.

This article originally appeared in the Contra Costa Marketplace Magazine.